VICTOR, NY - Celebrating a quarter of a century is worthy of celebration, no matter the occasion. But for The New York Apple Association (NYAA), this 25 years represents being a steward of the land and consistent support for its 600 growers. Represented across six regions and more than 50,000 acres, NYAA began in 1994, when groups of apple growers from eastern and western New York came together to uplift the state’s apple industry.

“More and more retailers are requesting social media and website content,” Cynthia Haskins, President and CEO, explained. “And our videos are by the grower, for the consumer.”

In addition to these videos—which NYAA is happy to make available for retailers—the association has several new merchandising tools this year, such as its Variety Guide, which includes photos of New York apple varieties, recipes, and fun nutritional information. NYAA also created a dietitian toolkit, which will be available upon request. 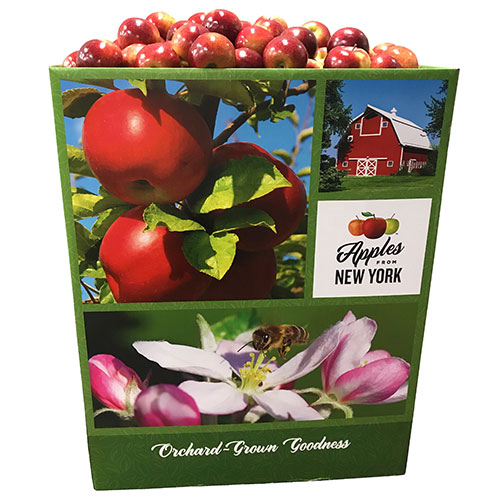 “Recipes, recipes, and more recipes!” Cynthia exclaimed, highlighting the importance to consumers to have applicable recipes at their fingertips. “NYAA will be adding recipes to its arsenal that include a little bit of healthy and a little bit of comfort, both of which are oh so good. The high-graphic recipes will be available to retailers to send out to their customers as well as post on their social media platforms and website—and hand out to customers in the store!”

With the New York apple harvest upon us, the crop is estimated at around 31,500 million bushels, all with excellent, beautiful quality and a high range of sizes. To commemorate the beginning of apple harvest, NYAA also launched a new poly tote bag with handles alongside its high-graphic display shipper.

But this, unbelievably, hasn’t exhausted the association. If anything, it has stirred up a fervor to keep going and delivering the best apples New York has to offer.

For its efforts, the NYAA and Cynthia have been recognized for several awards. In 2018, the association won Business of the Year from the New York State Agricultural Society. More recently, it won a Telly Award in the Business-to-Consumer, Local TV category for its brand TV commercial, as well as a PRism Award from the Public Relations Society of America in the Media Relations.

Check back in with us at AndNowUKnow for another deep dive into NYAA.