SELAH, WA - With an eye on the future growth for the organic fruit sector, Rainier Fruit Company was happy to show us around the newest addition to its state-of-the art organic facility.

“[We built this line to] increase capacity that was needed because the category is growing,” Scott Price, General Manager, tells us. "But it was also futuristic in thought."

With the latest in technology, as well as the newest in computerized defect sorting, the new line provides Rainier with both higher capacity and higher volumes for its organic operations.

“There’s nothing much more difficult than growing organic fruit,” Blake Belknap, Organic Sales Manager, said as he recalls when Founder of Rainier, Bill Zirkle, told him, “If we do things that are really difficult, it’s hard for people to follow.”

Blake explained that Rainier grows almost a third of the state’s organic crop, sold from August through June, and has grown into the largest organic blueberry and pear grower/producer in the Northwest.

The company also grows organic cherries and apples, a category that Blake notes the company is seeing a consumer gravitation towards the “rising stars” of apple varieties.

When it comes to the new “green facility,” Maintenance Manager Jeff Gill says it has successfully created an energy efficient envelope. “Our goal here was to construct a modern, state-of-the-art, sustainable, organic packing line.”

The result is the largest solar array of any fruit packer in the North West, Jeff explains, consisting of 336 solar panels, producing over 134K kilowatt hours annually. 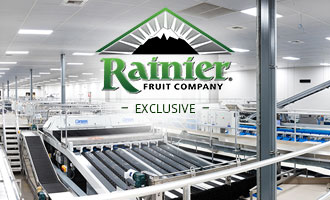 To see all that the new line has to offer, watch the two minute video above.

For over a century, Rainier Fruit Company has been growing premium Northwest fruit that consistently appeals to consumers....