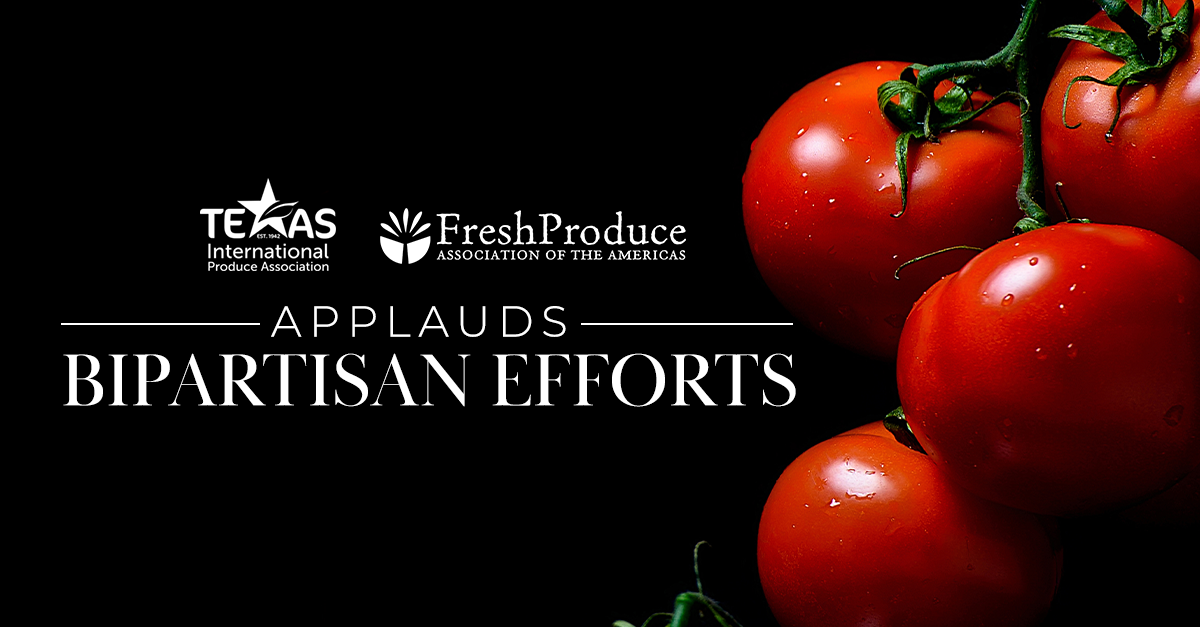 NOGALES, AZ - Congressman Vicente Gonzalez recently lead a bipartisan letter addressed to Gina Raimondo, Secretary of Commerce, regarding a proposal to reinterpret parts of the 2019 Suspension Agreement on Fresh Tomatoes from Mexico (TSA). Following that letter and in support of this move, the Fresh Produce Association of the Americas (FPAA) and the Texas International Produce Association (TIPA) released statements to highlight this recent action.

“Congress is right to speak up on this issue. The basic rules and terminology for how competitors behave in the marketplace should not be offered up for reinterpretation,” said Lance Jungmeyer, President of FPAA. “Since the first Tomato Suspension Agreement in 1996, the reference or sales price has always been established at the shipping warehouse. The terms and definitions in the Agreement incorporate produce industry norms established under the Perishable Agricultural Commodities Act (PACA), something with a much longer precedent even than the Tomato Agreement. The changes being pushed by the FTE are spurious and nonsensical. We hope the people that are concerned about this issue submit letters to Commerce, because it’s a serious concern that [the] industry needs to address.”

In the letter, Congressman Gonzalez highlights the strong trade relationship between the United States and Mexico, urging the U.S. Department of Commerce to maintain current mechanisms for determining reference pricing. Additionally, the letter proposes that the discussed change will harm border state economies, as distributors will need to change how their pricing is calculated, and tomato prices for working families would be expected to jump.

The U.S. Department of Commerce is reportedly in the process of reviewing written submissions on this issue. Following this, the agency will publish a proposed clarification which will undergo an additional public comment period, a press release stated. The FPAA, TIPA, and many others are continuously encouraging Commerce to maintain the precedent that has existed in the Tomato Suspension Agreement since 1996, and that has existed in the produce industry at large since PACA was established.

“The matter of not only changing the interpretation of the 2019 Tomato Suspension Agreement, but changing a fundamental term such as ‘FOB Shipping Point,’ will have far-reaching implications and potentially devastating economic impacts throughout Texas and North America,” said Dante Galeazzi, President and Chief Executive Officer of TIPA. “The tomatoes brought from Mexico through Texas represent investments in our state, jobs for our local communities, and a healthy and affordable food for all Americans. We applaud and thank Congressman Gonzalez for his leadership, as well as the other Congressional representatives that support this effort and this letter. It is their efforts and their backing that makes our voices heard and addressing these issues with Commerce possible. The fresh produce industry in Texas looks forward to continuing to work with our elected officials in DC to ensure the spirit of the agreement remains intact and is executed as intended.”

ANUK will continue to follow the developments of this agreement, so stick with us.