DALLAS, TX - Following its highly publicized venture into being the first produce company to have a commercial run during the Super Bowl, Avocados from Mexico (AFM), is about to take another dip into the entertainment pool with the company’s first-ever appearance in the 89th Annual Macy's Thanksgiving Day Parade® in New York City.

Along with the help of rock musician Daughtry, AFM’s “Always in Season” float will travel through New York City on Thanksgiving Day via a life-sized cafe equipped with extra helpings of guac. According to a press release, however, the brand's adventure kicks off long before the iconic Macy's Thanksgiving Day Parade® route through the city.

"We are thrilled to heat up the 89th Annual Macy's Thanksgiving Day Parade this year and invite people across the country to welcome their favorite fruit as a delicious and nutritious holiday addition," said Alvaro Luque, President of Avocados From Mexico. "This has been a huge year of firsts for the brand, from our foray into football and advertising's biggest night, to helping launch Partnership for a Healthier America's (PHA) newest health initiative, FNV, our goal is to share AVO-love every season in fresh, unexpected ways." 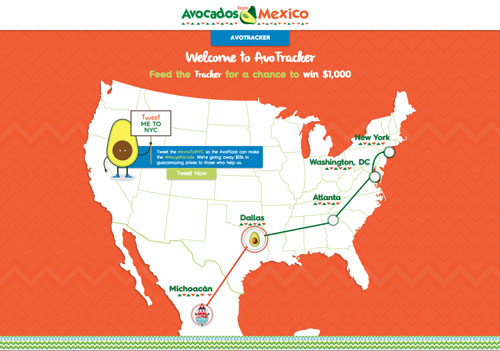 Avocados from Mexico is starting by inviting fans to jumpstart its road trip from Mexico to New York City via an interactive digital promotion and sweepstakes. Beginning midnight on November 19th through Thanksgiving Day, the brand is calling fans to help fuel the company’s journey by tweeting #MacysParade and #AvoTracker. The sweepstakes will include a chance to win a $1,000 Macy's gift card. Visit www.avotracker.com to follow the Avocado From Mexico's float on a virtual, interactive map.