WENATCHEE, WA - Following what CMI is calling a successful apple import season, U.S. growers of KIKU® brand apples announced this week that this year’s packing will be starting early to respond to strong and rising retail demand.

“If you look at the most recent 13 weeks of apple category data, KIKU® rocked the category for retailers,” explains Steve Lutz, Vice President of Marketing for CMI, as he reveals that retail sales data touts KIKU® brand apples as one of the “hot brands” in the apple category. “Among the top 15 apples, only six increased year over year sales. Among those, KIKU® apples had the second highest dollar growth rate at 64%.” 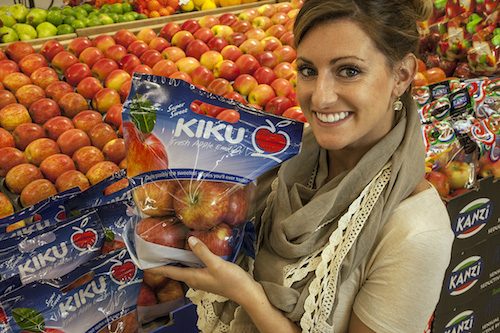 Tim Welsh, Chief Horticulturist for Columbia Fruit Packers, confirmed that the KIKU® season will launch early in response to strong retail demand for increased production. As the primary U.S. license holder for KIKU®, Columbia Fruit Packers says the company has aligned with growing partners Applewood Orchards in Michigan and Rice Fruit Company in Pennsylvania to help ramp up production quickly for retailers.

“All three licensed producers of KIKU® brand apples increased plantings based on strong feedback from retailers and consumers,” said Welsh. “It’s been tough to keep KIKU® on the shelves. Now with the 2015 harvest, total KIKU® production will have doubled from just two years ago.”

John Rice, President of Rice Fruit Company in Pennsylvania said in a press release that he is not surprised by KIKU®’s success.

“Our family has been growing apples here in Pennsylvania for seven generations,” explained Rice. “We grow all kinds of apples and we’ve never seen anything like KIKU®. It’s simply the sweetest, best tasting apple we have ever grown.”

Scott Swindeman, Vice President of Applewood Orchards, Inc. in Michigan, says that as KIKU® trees mature, quality has continued to improve. With growers in Washington, Michigan, and Pennsylvania all reporting that this is one of the finest crops of KIKU® yet, he says, color, condition, and eating quality are excellent, and Applewood Orchards is excited about starting the season in time for the holidays.

Lutz continued by saying that apples like KIKU® are vital for retailers in continuing to respond to changing consumer purchase behavior while building a stronger apple category. 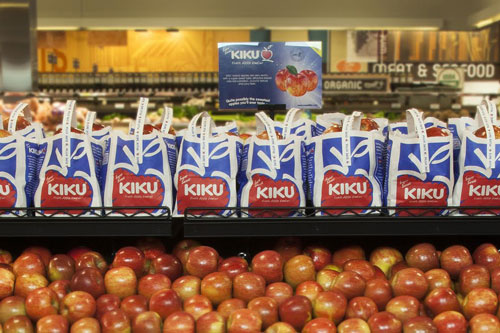 “Nearly all of the major apple varieties had dollar declines at retail last year despite the large harvest” he added. “In a way, KIKU® is similar to Honeycrisp. The unique flavor profile allows for stronger pricing while trading consumers up to a more expensive purchase.”

This will in turn drives sales dollars for retailers, Lutz finished explaining in the press release, while bringing consumers back to the store sooner because of the outstanding eating experience.