As the storm washed ashore, the Bureau of Meteorology reported rainfall totals of 39.37 inches in some areas, with some regions gaining over 25 inches in just 24 hours. The storm moved ashore with winds up to 160 miles an hour, but weakened as it moved inland. By Wednesday morning, authorities downgraded the system to a tropical low. 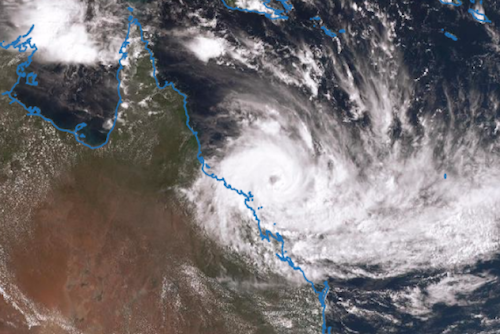 Northeastern Australia and its outlying islands that were affected by the storm have suffered significant structural damage to its buildings. The Courier Mail also reported flooding and some damage to roads, with transportation delayed. Authorities are moving to provide citizens and businesses with power, food, fuel, and more.

Heavy rainfall and flooding is still expected into Thursday as the storm moves completely out of the country. Coastal communities from Brisbane to Sydney are expected to feel the after-effects with strong winds and 2-4 inches of rain possible.

Some crops in the region are expected to be lost, though authorities are still assessing the damage. Though the storm moved through primarily Eastern Queensland, the storms immediate reach was felt as far north as Cardwell, and as far south as St. Lawrence.

Some coastal regions and towns are still without power. AccuWeather reported that Queenslands highest wind gust was also recorded during the storm, clocking in at over 160 mph, which also made it the second strongest burst of wind for the country.