YUMA, AZ and SALINAS, CA - It is that time of year again, and as winter comes to a close, growers are looking to the transition from Yuma and the desert regions of Arizona and California, back to their operations in Salinas and Oxnard, CA.  With the early harvests across multiple categories last year, I spoke with a few California growers who gave me the latest updates on the current outlook.

While some growers have told me that there is the possibility for production gaps on the horizon, Duda’s Production Manager, Martin Jefferson, tells me, “Although there are some comments within the industry of the transition being ‘early’, I do not expect there to be any substantial gaps as operations move north to the Salinas region. Speaking specifically of our own operations; Duda Farm Fresh Foods is on course to have a seamless, and essentially on time transition between the regions. Although we may be ahead by a few days, there is nothing further than a week off schedule. With the exception of celery- which is now coming from Oxnard- head lettuce, romaine, mix leaf and broccoli are all expected to start the first week of April.”

On another note, Tanimura & Antle hit some unexpected challenges as the desert growing season wound down, but as Mike Antle, Executive Vice President and Chief Operations Officer, tells me, the company is looking forward to the start of its cauliflower and broccoli program in Salinas this week. Currently lettuce and romaine are offering good supply to the market. Celery, Green and Red Leaf, Broccoli and Cauliflower prices are improving.

“Our Broccoli deal in Yuma came to an unexpected end due to the warm weather there and Cauliflower will be in both Salinas and Yuma for this week and next, as planned. All other items will run through March in Yuma with a slight overlap with Tres Picos starting March 30th,” Mike tells me. “We will start leaf and lettuces in Salinas the end of April. We finished Celery in Yuma last Friday and will be 100% in Oxnard until the third week in June. Harvest is moving quickly in the desert with warm weather. Salinas and San Joaquin are wet, but for the most part on schedule. If we continue to get rain in the Central Coast there will be disruptions in supply, but nothing is certain at this point.” 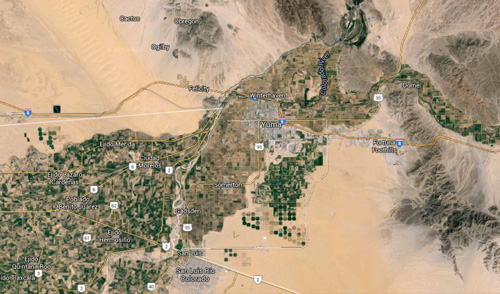 For Ippolito International, the company tells me that they are budgeted to stay in Yuma through roughly April 13th or so, with Salinas budgeted to start April 11th. At present, Ippolito’s only exception is celery, which transitions from Yuma to Oxnard at the end of the month.  Like most growing operations in Salinas, broccoli and cauliflower will be the first categories to come on.

“On most commodities we have in Yuma, we look to be close on our ending dates versus what we had budgeted for,” General Manager, Butch Corda, says.

With Mother Nature consistently keeping growers on their toes, he notes that Salinas, more than likely, appears to be on schedule or a few days early.  “Obviously, the weather between now and April 10th or so can change what we are currently seeing in regards to ending dates in Yuma and actual start dates on our Salinas crops.”

“But, we are thinking many commodities have an excellent chance to improve and become quite active,” Butch tells me. “Broccoli is already experiencing an uptick, on both demand and pricing.”

Stay tuned to AndNowUKnow as we continute to bring you updates on the market during the Yuma to Salinas transition.