SOUTHEAST U.S. – Freezing weather has hit the Gulf Coast this week, with freeze warnings and snow impacting the Southeast from Texas to Florida. The National Weather Service (NWS) has issued dozens of freeze, hard freeze, and winter weather advisories throughout the region—warning of rain, freezing rain, and sleet across the Gulf Coast and into Georgia.

“The wintry weather and deicing operations may significantly delay airline passengers,” noted Senior Meteorologist Kristina Pydynowski, in an AccuWeather report, published Tuesday morning, noting trying travel conditions from Texas to Tennessee. “While any freezing rain is not expected to accrue enough for widespread power outages, just a coating of snow or ice is enough to make untreated roads slick.” 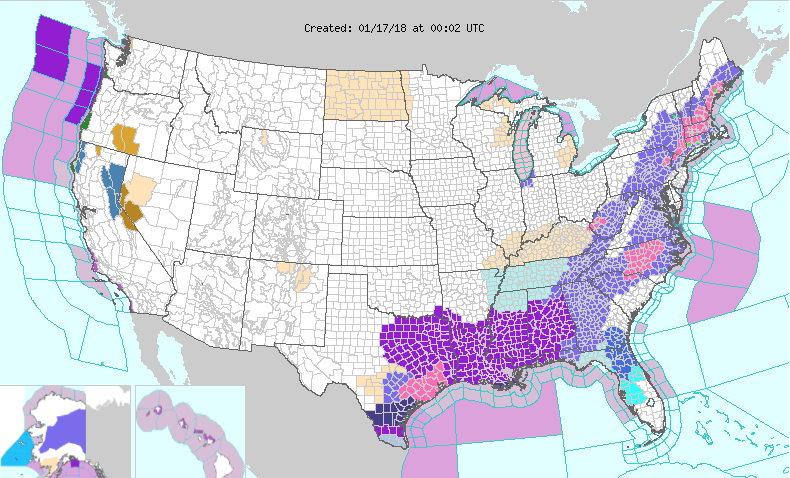 Road closures have been reported in Louisiana, and travel delays are expected to occur throughout Tuesday and Wednesday and span the entire Gulf region—with significant delays expected along portions of Interstates 10, 20, 35, and 45.

While extreme cold will affect much of the Gulf—and snow is falling across the Appalachians, Florida does not expect widespread snow or ice. Nonetheless, a NWS hard freeze warning for much of central Florida is currently in place, and local new source the Crestview News Bulletin has noted that temperatures Tuesday night were expected to drop well below freezing.

“We’re not looking at widespread ice or snow,” Okaloosa County Emergency Management Division Chief Randy McDaniel told the Bulletin as of Tuesday morning. “I would just caution people as they’re driving, if the bridge looks wet in the morning, there’s a good chance that could be a patch of ice and they need to exercise caution while driving.”