TAMPERE, FINLAND - Folks who follow food trends are likely keen on the plant-based meat alternatives which are sweeping the nation. Now, the fad has popped up in the last place you might expect: McDonald's, the carnivore's last stand.

It seems that plant-based proteins are prevailing in 2017. Since Beyond Meat, the Bill Gates-backed veggie burger that "bleeds," has inked deals with major foodservice and retail companies, and Whole Foods launched its tomato alternative for seafood, this craze looks to be taking hold. According to Today.com, McDonald's announced "The McVegan" to its lineup, piloting the burger at just one location in Tampere, Finland.

According to the report, the soy-based patty has all the vegan fixings, and there are no current plans to expand the distribution. However, upon learning the news, Twitter is afire with international demands for the burger. 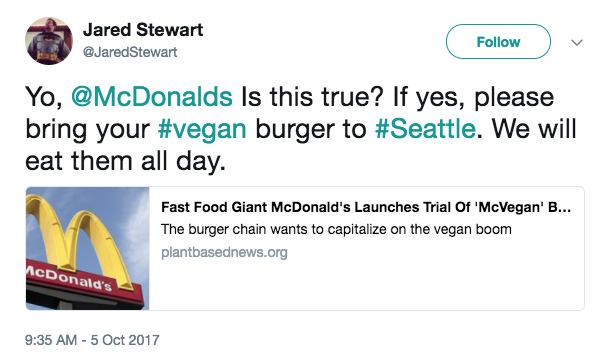 According to GrubStreet.com, the vegan burgers test will be short lived, as the McVegan will only be offered through November 21.

How will this, and other plant-based trends, continue shaping the produce industry? Check in with AndNowUKnow as we bring you the latest.