Pete is a No-Go but Ariana Says...YES to a Mango!

LOS ANGELES, CA - Big news: It is time to rethink everything. While gossip magazines and news headlines have been pushing a Big Sean reunion, a Mac Miller tribute, and even random Pete Davidson drama as the inspo behind many of the pop anthems on Ariana Grande’s double album drop, ANUK is the first to report that produce was presumably her real muse. And after one early morning tweet waxing poetic—literally!—about mangos, it’s a no brainer. 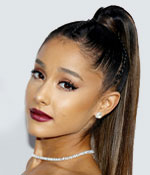 Last weekend, the pop songstress tweeted out a poem by 13th-century Indian poet Amir Khusrau. In Khusrau’s poem, titled “He Visits My Town Once a Year,” an unidentified speaker genders a mango and misleads an audience about just who she is sharing sweet kisses with and spending all her money on. In the same vein as the poem’s punchline, Grande then tweeted out, “nah…. a mango.” 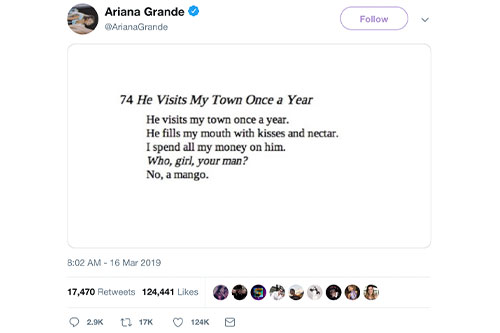 Since these tweets went live, I, Kayla Webb, resident pop culture nerd, did some super sleuthing and uncovered but a few of the lyrics we need to rethink now that we know Ariana is mango's #1 fan:

I think it’s also safe to assume that “break up with your girlfriend, i’m bored” was written between grocery trips as her mango supply dwindled.

Bananas? Durians? Plums? As Ariana would say: Thank you, next! In the Arianator fandom, we only have room in our hearts for mangos!