RICHLAND, WA - Railex has announced that it will be hosting this year's Potato Season Kick-Off Meetings & Luncheons in beautiful Washington State. 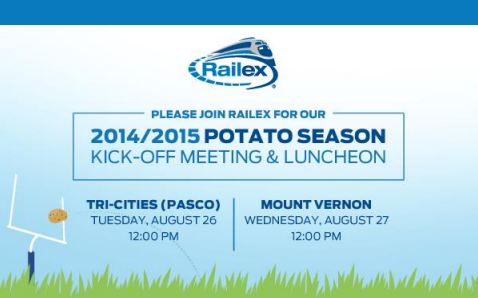 There will be two meetings altogether along with the luncheon and Railex says that it will be a great event for potato shippers to kick-off this year's harvest season.

The event will start with a meet-and-greet at Anthony's Restaurant, in Richland, WA starting at noon on August 26th. The second meeting will also start at noon the following day and will be held at Max Dale's Steak & Chop House in Mount Vernon, WA.

According to the press release, interested participants should send RSVP's to Railex by August 20th.