ESSEN, GERMANY - Discount chain Aldi is projected to nearly double its sales by 2019, according to a new report released by investment bank UBS. Analysts suggest that the German-based retailer will increase its current sales from $5.3 billion to $9.3 billion in the next five years, potentially taking an estimated $250 million to $350 million worth of sales from Australian grocery chains Woolworths, Coles, and Metcash, which owns IGA. 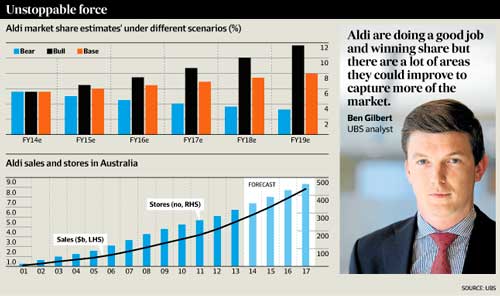 Gilbert suggests that the retailer could grow sales by at least 12% a year over the next five years and have an especially large impact on the Australian grocery market if it continues its expansion in Western and South Australia. This research is based on the company’s progress over the last few years and the shopping habits of more than 600 individual customers, according to The Sydney Morning Herald.

In response to the report, Aldi’s joint group managing director, Stefan Kopp, said that UBS’s market share, sales, and store numbers were right around current company expectations. He argued that though he believes the company will continue growing, he suggested that the company will “never be a big player” or “even close to the size of Coles and Woolworths,” Sydney Morning Herald reports.

“Nine billion [dollars in sales] is achievable and slightly optimistic. I wouldn’t go beyond that,” he said. “We have 350 stores (in Australia) and we plan to open 25 a year for the next years. Most of those new stores will be fill-in stores and they’ll take some sales away from existing stores.”

He concluded by noting that the company is getting better by continuing to extend its produce range, adding meat items, a more sophisticated bread offering, and rejuvenating older stores.

This discount grocery store certainly seems like it’s getting a leg up on fellow retailers with an increased focus on fresh foods, but will it be enough to take away market share from the competition? Stay tuned to AndNowUKnow as we find out.