ISSAQUAH, WA - When you’re at the top of the organic produce game, how do you stay at the head of the pack? A big part of maintaining its over $4 billion dollars in organic sales, Costco says, is through the sourcing of enough fresh produce.

Costco anticipates to over double its organic sales by 2020, reports news source EuroFresh, planning to exceed $10 billion. The company has projected its organics program to grow in double-digits each year in sales until it reaches that goal. In order to keep up with that fast-growing demand, you have to be able to get your hands on a lot of product. 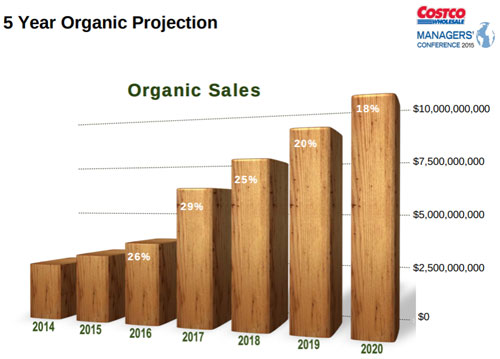 One way Costco has tried to answer this problem is through its work with San Diego-based supplier, Andrew and Williamson, helping them to buy both equipment and land in Baja California, Mexico. In return, Andrew and Williamson says, Costco will have first access to the organic products produced there.

“By helping them with financing, we got access to and purchased about 145,000 cases of organic raspberries that we normally would not have access to,” Costco’s Senior Vice President of Fresh Foods, Jeff Lyons, told the Seattle Times. The paper also reported the retailer’s plans to work with other companies in a similar fashion, including a large group with operations in Chile and Mexico.

At this year’s United Fresh conference during a panel on organic produce, Frank Padilla, Costco’s Vice President and General Merchandise Manager for Produce and Meat, gave a presentation on why organics is seen as such a major focus for the company, listing the following reason:

Padilla also noted that Costco does not separate its organics into an ‘organic’ section, instead letting consumers have all their options in front of them. “The danger is that it (an organic product) could be the only choice. If you don’t have the right quality, the right specifications, the right shelf-life and value, you are going to turn the non-organic consumers off,” Padilla told Growing magazine. “We also face the danger that if it’s not available at the time, you may not have that item to sell.”

Along with finding adequate and efficient sourcing, Padilla outlined the following other strategies to increase organic sales:

What partnerships and initiatives will Costco implement as it plans to reach the $10 billion organics goal? AndNowUKnow will keep reporting as each new move is made.