BELGIUM – Today, Greenyard Foods announced that in an effort to expand and grow, Hein Deprez will take on the CEO position, and will jointly steer the company with current CFO Carl Peeters, who will soon take on the new COO position.

Greenyard also announced Marleen Vaesen, the current CEO, will leave the company in mutual consent on January 31, 2018. After becoming CEO in 2012, Vaesen successfully led the company’s merger in 2015 and was responsible for building its future, including aligning the three entities and bringing new people on board. 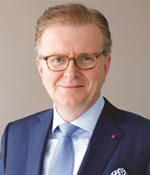 “I would like to thank Marleen for her valuable contribution by transforming Greenyard into today’s modern, strong company,” Hein Deprez said. “We wish her the very best in her future endeavors. After this initial transformation period following the merger, the announced management changes are a next step to further execute our strategy. By doing so, we will focus even more on our strategy and priorities to continue generating profitable growth and strengthening our global leadership position in fruit and vegetables.”

In a company press release, Greenyard also revealed it was time to bring the company to the next level and strengthen its organization at the business level. The company also stated Tim Van Londersele will lead all Fresh operations except the Greenyard Bakker operation, which will be managed by Irénke Meekma, with Stefaan Vandael continuing to lead the Horticulture segment. The company is currently looking for someone to takeover as CFO.

For more news like this, stay tuned to AndNowUKnow for the latest in our industry.

Greenyard is a global market leader in fresh and prepared fruits and vegetables, flowers and plants, fresh logistic...