Hundreds of Pumpkins Stolen from Farm in Grant Township, Michigan

CLAIR COUNTY, MI - The seasons have changed, the weather has chilled, and the Pumpkin Spiced Lattes at Starbs, Peet’s, and everything in between have emerged. As we get more cozy and festive leading up to the end of the year, holiday favorites like pumpkin carving, pie making, and produce picking start becoming popular again. That is until a thief throws a knife into the plans. October began with the first pumpkin heist of the year, and now we have another at a farm in St. Clair County, Michigan. Ray Peltier, the owner of McCallum’s Orchard & Cider Mill in Grant Township, claims that hundreds of pumpkins were stolen in a matter of hours last week.

“Every single pumpkin was taken out of there,” said Peltier in disbelief. Peltier has been the owner of the farm for two years, and he describes it as "80-acres of family fun."

Detroit’s 7 Action News reports that at least 350 pumpkins were stolen early Monday morning between the hours of 2 a.m. to 7 a.m. To make matters worse, that number doesn’t even include the pumpkin patch; the farm revealed that the number could double to 700 stolen pumpkins. 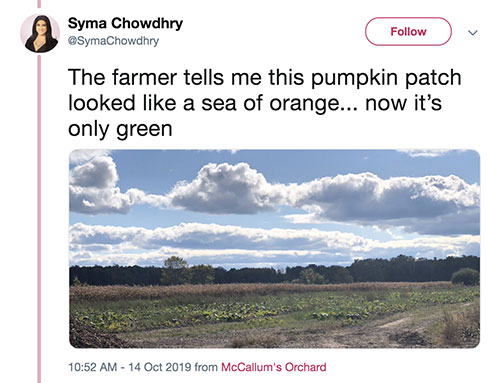 Peltier stated that he and the staff didn’t even realize the pumpkins were missing until hours later. He told the local news station that the thieves carefully took the pumpkins, not breaking the stems. With each gourd estimated to go up to $10 each, Peltier believes that the clean picks were stolen for illicit profit, valuing a loss of thousands of dollars for the farm. After battling a drought this year, the pumpkin theft was a crushing blow.

“Our people lost sleep because they don’t see it as a pumpkin, they see it as all our efforts,” Peltier said.

The pumpkins were meant for painting and making pies McCallum’s sells in the shop. A silver lining, however, was the community response; Peltier is now getting help from other local farmers as they give McCallum’s some of their pumpkins.

“[It] gives you goosebumps with these people helping,” he said.

We here at AndNowUKnow hope that the people responsible will receive their “just deserts.”