NORTH AMERICA, BAHAMAS - Hurricane Dorian has already wrecked havoc on the Bahamas, resulting in heartbreaking country-wide devastation. But the threat isn’t over yet. Dorian is currently picking up speed and heading towards the U.S., starting near the east coast of Florida and working its way up the coast in the coming days.

According to AccuWeather, Dorian will have a milder impact on the U.S. than it did in the Bahamas, though that is not to say we are out of harm’s way just yet. The weather news source reports that the northeast can expect heavy, gusty, and locally severe thunderstorms. The center of the storm is expected to remain offshore in the northeastern U.S., but tropical storm conditions will continue to spread northward. 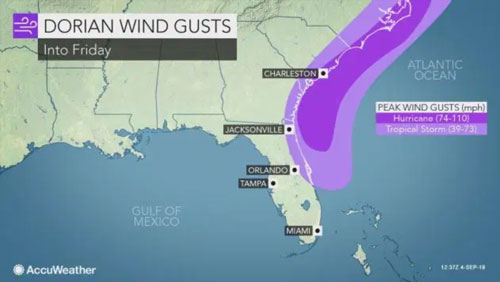 From Virginia to Maine, the East Coast will potentially experience above normal tides, coastal flooding, beach erosion, heavy surf, and dangerous rip currents. Even inland cities are expected to be impacted by Dorian, with rain and wind potentially reaching Philadelphia, PA; New York, NY; Norfolk, VA; Baltimore and Ocean City, MD; and Atlantic City, NJ, on Friday. Growers in those regions should prepare for the possibility of flooding and power outages.

Urban flooding is a possibility as well in areas around the lower part of the Chesapeake Bay, AccuWeather reports, with approximately three to six inches of rain expected in southeastern Virginia, and lesser amounts along the mid-Atlantic coast. As Dorian heads north, strong tropical storm to hurricane conditions are anticipated in the Cape Cod, Massachusetts region.

AndNowUKnow will keep you posted on all new developments.