DALLAS & AUSTIN, TX - Still not convinced by all the hype on online ordering and grocery pick up? It seems like Kroger is, at least. By the end of the year, Kroger expects to expand its “ClickList” online ordering and pickup service to around 20 of its locations in North Texas, mainly in the Dallas and Houston areas.

Starting this summer, shoppers will be able to choose from nearly 40,000 items in the store and pick them up without ever going inside, explains Dana Zurcher, Kroger’s Dallas division President. This decision, of course, is a natural progression of the growing trend in online grocery shopping, particularly in the North Texas region.

“Kroger’s decision is not a defensive move, it’s understanding that the shopper expects you to do business this way,” Craig Rosenblum, Senior Director at research firm Willard Bishop Inmar shared with the Dallas Morning News. “While it may be small, e-commerce will continue to be an important part of every retail business.”

Currently about 8 to 10 percent of its business, Kroger says, Rosenblum expects the e-commerce sector of the business to double over the next three to five years, and reach up to 20 percent. According to the Dallas Morning News, Rosenblum  says the main two demographics of services like ClickList are “soccer mom” types who don’t want have to drag their kids into the store, and the elderly who would prefer to have another person do their shopping for them. 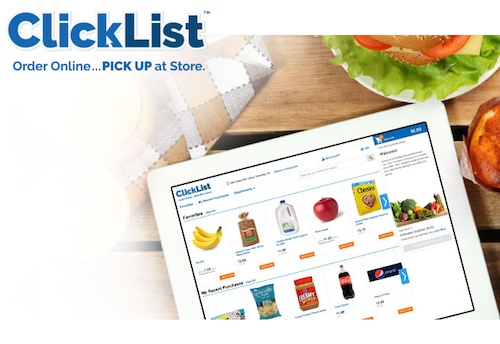 Other recent online grocery expansions into the Dallas-Austin region include:

While Kroger hasn’t yet released the list of regional stores that will be equipped for ClickList, the Kroger Marketplace that opened last Friday in Prosper, TX, will be one of them, Zurcher says.

“We’re still selecting the stores and trying to pick the ones where more customers are apt to use it,” added Zurcher. “Plus physically, with new stores it’s easy to incorporate it, but with existing stores we have to think about whether we can add it.”

There’s no doubt that retailers will continue to expand their reach for online grocery shopping, so stay tuned to AndNowUKnow for more.