CINCINNATI, OH – Kroger may have just gotten a leg up in the ever-shifting competitive nature of the buy-side industry as analyst and Vice President at Goldman Sachs, Stephen Tanal, has just upgraded the retailer’s stock from Neutral to Buy.

Tanal upgraded Kroger’s rating in a report covering food retailers with a Neutral grading, according to Benzinga.com. Tanal stated that Kroger’s long-term outlooks were promising given Kroger’s “entrenched, multi-local dominant positioning, driving local economies of scale across the U.S.”

In addition to the upgraded rating, Tanal added Kroger’s stock to the analyst’s Conviction List, with an assigned price target of $42, signifiying a projected growth of 17 percent. 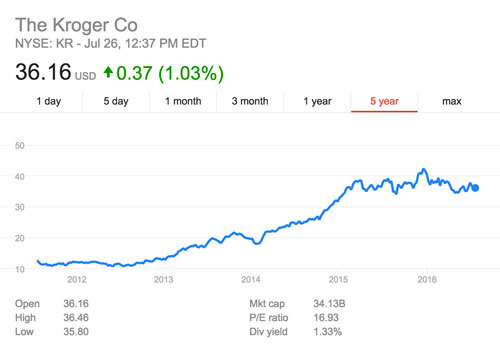 Tanal recommended companies like Kroger in his report, as it primarily serves “low population density areas that are better insulated from competitive intrusion.”

Tanal also noted that as Kroger has no international footprint, the company should remain unaffected by global shifts and uncertainties. Kroger stock, according to the analyst, already shows reflections of success in terms of taking shares from its competitors.

This upgrade is not the first for the company, as TheStreet also reported that Hilliard Lyons upgraded Kroger’s stock to Buy from Neutral just last month.

Could Kroger be making considerable moves ahead of its competition in the tight U.S. retail markets?

As Kroger and other retailers continue to strengthen their revenue growth and retail strategies, AndNowUKnow will continue to report on financial shifts and the subsequent leaders in the buy-side industry.