NEW YORK, NY - Close your eyes and imagine that the most decadent dessert is sitting in front of you. You lift the morsel to your mouth, take a whiff, and sink your teeth in. What does it taste like? Words like dense, creamy, and gooey circle your head. Now, open your eyes. You look down at your hand, only to see the most juicy, red strawberry in existence. It’s the Omakase berry, grown only on an indoor farm in Kearny, New Jersey, by a company called Oishii. According to Eater, these berries have quickly grown a cult-like following with high-end chefs in the state of New York, appearing unadorned at Michelin-starred restaurants like Sushi Ginza Onodera and Atomix. The news source reported that a sushi-style box of eight strawberries costs $50, so, naturally, we had to investigate. 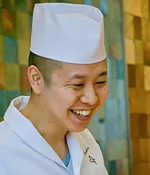 “The sweetness is completely different—I knew with my first bite I had found a berry on a different level,” says Head Sushi Chef at the New York-based restaurant Suzuki, Kazushige Suzuki. “The texture, then the burst of sweetness are such a pleasure that I decided to serve the strawberry whole as a dessert, not even cut.”

The berries were pioneered by Oishii Co-Founder and CEO Hiroki Koga, who is originally from Tokyo. The seeds travel from Japan to the East Coast to be grown vertically for high-society eaters like those in New York. Many chefs have taken a liking to the fruit, often serving it as-is for an indulgent dessert. According to the chefs this berry’s flavor is unlike any other in America, with an ideal size, receded seeds, and evergreen leaves.

“Typically, a high-quality strawberry that one would be able to find in the U.S. is tart while sweet, and often it’s not perfectly ripe—either a little under, or a bit too ripe,” says Junghyun Park, Executive Chef of upscale Korean restaurant Atomix. “Oishii’s strawberries are much more balanced; it has a creamier texture, and the flavors are not sharp but more gentle and fragrant.”

Eater reports that these berries obtain their perfection through rigorous testing done by the grower. Before the berries are even harvested, the sugar content is measured, with an ideal amount of 13 to 14 brix compared to the 5 or 6 brix of a traditional strawberry. One of the biggest draws of this berry for high-end chefs in New York is its consistency that spans over the entire year.

Intrigued? Me too. Maybe one day the Omakase berry will hit the mainstream grocery floors. For now, keep reading AndNowUKnow for the industry’s latest.