CALIFORNIA – After a huge ridge of atmospheric pressure peaked off the West Coast, pushing potential rain out of the bay and up north and causing one of the driest Decembers on record, rain has finally returned to the Bay and much of the rest of California on Wednesday. Though Californians hope the rain will continue, meteorologists are still uncertain.

“I would say the storm door is cracked open a little bit,” said Steve Anderson, Meteorologist with the National Weather Service in an interview with The Mercury News. “It’s not wide open. But we’re finally getting the high pressure out of here so systems can start coming into the west. Not a whole lot. Just enough to settle the dust.”

Meteorologists predict just two-tenths to half of an inch of rain in most cities, although costal ranges and the North Bay mountains may see more according to The Mercury News. But, with a second storm expected on Friday and another, more substantial fall Tuesday or Wednesday next week, the North Bay can look forward to the possibility of more substantial rainfall. 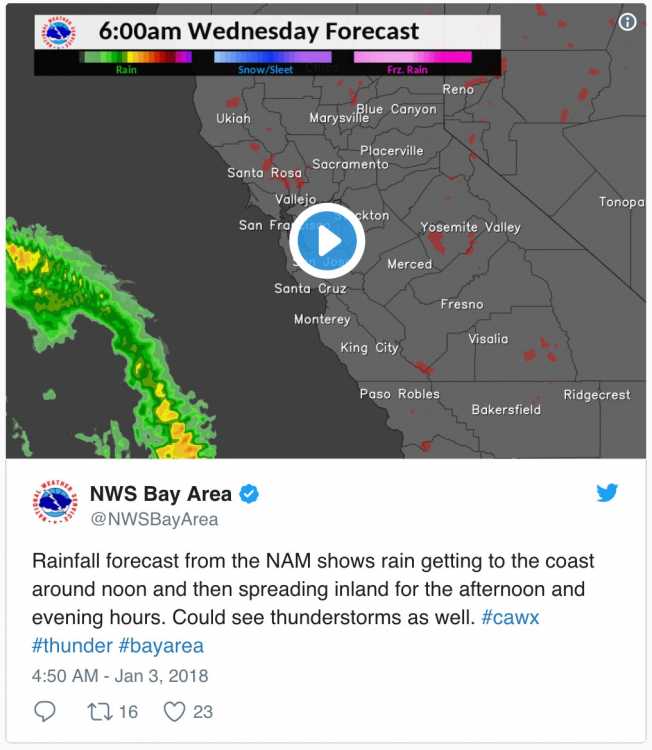 This dry December follows a recent trend, with last December having been the second driest on record in San Jose and the fourth driest in San Francisco. But this year has been especially dry, with San Jose, Oakland, and San Francisco all receiving 2.5 times less rain that just last year. With Wednesday’s rain perhaps the fates have turned, as even sunny Southern California may have a chance of rain in the coming days.