CALIFORNIA - It’s time to dust off our raincoats and locate our umbrellas, fellow Golden State residents. Storms are a-brewing across California, with the first of three storms expected to move in to the central and southern parts of the state as early as this (Friday) afternoon, according to a report by AccuWeather.

Three main storm systems are heading toward the West Coast this weekend and early next week and will bring periods of heavy rain to coastal Southern California and snow to the Sierras. AccuWeather predicts Los Angeles will receive nearly 0.5 inches of rain in the first storm, which is expected to be the lightest of the bunch, and 0.75 inches of rain in the second storm. The last of the storms will hit in the middle of the week, impact all of California, and bring another “heavy dose of snow to the Sierras.” 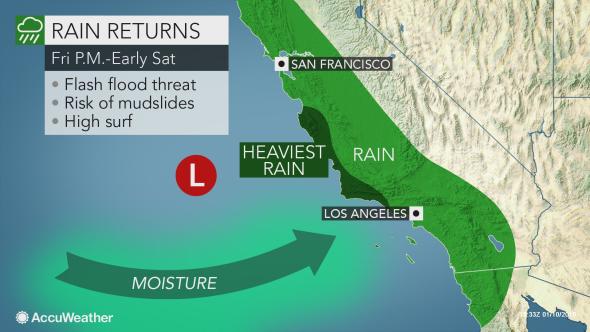 “The storm on Sunday through Tuesday will be strong enough to bring heavy snowfall into the Sierra Mountains,” said AccuWeather Meteorologist Brett Edwards. “This additional snowfall will be beneficial for the ski resorts up in the mountains.”

During this time, Californians can expect delays on coastal roadways from San Diego through Los Angeles, Santa Barbara, San Jose, and San Francisco.

Here’s to hoping fresh produce is feeling thirsty this next week! For more weather updates as they relate to fruit and veg, stay up-to-date with AndNowUKnow.