THE INTERWEBS - Like the allusive treasure many great questers have chased after in mythology, literature, and tales of old, so too is the industry perusing the interwebs for official Trader Joe’s news. Official news from TJ’s doesn’t even happen once in a blue moon—that’s how rare it is to hear from the cult grocery icon itself: i.e. never. You might be wondering at this point how Trader Joe’s promotes itself and its products? We had a similar question, which led us on a wild goose chase to unravel the tightly spun web Trader Joe’s weaves.

Unfortunately—or fortunately, depending on how you look at it—Vox beat us to the punch in uncovering one of Trader Joe’s allegedly unbeknownst secret weapons: Instagrammers. According to the news source, dozens of Instagram accounts lay in waiting for new products to grace their lord and savior’s shelves and then report on said products to their thousands and thousands of followers (we're talking upwards of 50K!). 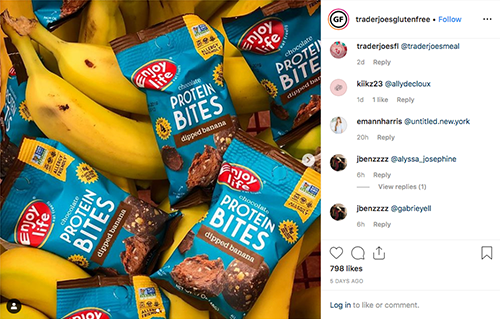 Accounts like @traderjoesglutenfree, @traderjoeslist, @traderjoesaficionado, @traderjoeskitchen, and more have all garnered their own mass followings simply by doing what Trader Joe’s chooses not to. And while the retailer hasn’t laid claim to any of these accounts—Vox even reports that representatives from Trader Joe’s have sent letters to some influencers urging them to clarify they are not affiliated with the grocer—no one can say TJ’s isn’t benefitting from the free publicity. It’s a unique strategy, and one that only continues to stoke the flames of adoration found in the hearts of its Trader Beaus.

Like a stereotypical bad boy in any of our favorite romcoms, is Trader Joe’s mysteriousness, on the internet and IRL (in real life), one of its key promotional tactics, with its fleet of Instagrammers being another? And should more retailers look to social media to find their next taskforce of promotional manpower? AndNowUKnow will continue to be your guide to the latest movements in grocery retail.