UNITED STATES - 84-year old Actor William Shatner has a lot of experience saving the universe. As Captain James T. Kirk of Star Trek’s USS Enterprise, there was rarely a day he couldn’t solve every problem thrown his way. But when hearing about his most recent venture, it's hard not to think that kind of power went straight to his ego.

Shatner announced on Friday to Yahoo! Tech that he plans to launch a Kickstarter to raise $30 billion for a water pipeline from Seattle, WA to Lake Mead, NV, with plans to feed water to Arizona, Nevada, and California.

“California’s in the midst of a 4-year-old drought,” Shatner told Yahoo! Tech's David Pogue. “They tell us there’s a year’s supply of water left. If it doesn’t rain next year, what do 20 million people in the breadbasket of the world do? In a place that’s the fifth-largest GDP — if California were a country, it’d be fifth in line — we’re about to be arid! What do you do about it?”

Will he use phasers or ray guns to save the world this time? Try Kickstarter instead.

“So I’m starting a Kickstarter campaign. I want $30 billion … to build a pipeline like the Alaska pipeline. Say, from Seattle — a place where there’s a lot of water. There’s too much water. How bad would it be to get a large, 4-foot pipeline, keep it above ground — because if it leaks, you’re irrigating!” exclaimed Shatner.

I spoke with Barry Bedwell, President of the California Fresh Fruit Association, and he only had this to say, “I have not seen any details, but the story was brought up in a meeting today in Sacramento and no one in the room seemed to take it very seriously.”

Could Captain Kirk really be steering us wrong this time?

“It’s simple,” Shatner assures. “They did it in Alaska — why can’t they do it along Highway 5? This whole area’s about to go under!”

Shatner agreed that even if he’s not able to raise the money, the effort will at least raise consciousness for California’s drought.

“If I don’t make 30 billion, I’ll give the money to a politician who says, ‘I’ll build it.’ Obviously, it’s to raise awareness that something more than just closing your tap … so why not a pipeline?”

There has been some blowback from Shatner's comments, but the actor has been responding with charm, tweeting out a few choice responses to Washington residents on his proposal. 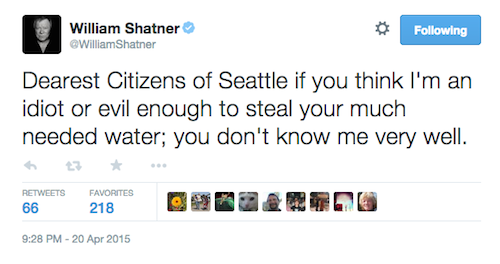 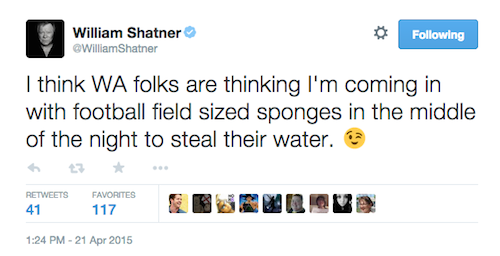 However unrealistic Shatner's campaign may be, it's definitely creating a conversation — which may have been his mission all along.