DENVER, CO – In a new starring role for the fruit, WhiteWave Foods has announced that it’s adding banana milk to its lineup as the expected next big trend in dairy alternatives.

The company developed the line at its research and development center in Louisville after researching current sales and trends in the diary market. Thus, comes the banana innovation in the new line of Sir Bananas products.

"We're excited about the potential that it has," WhiteWave Foods’ Marketing Director, Lauren Tankersley, said in a statement to the Denver Post.

The Sir Bananas line is two percent milk blended with bananas, and available in regular and chocolate flavors. The company said that with seven grams of protein, and 27 percent of the recommended potassium intake, the product has the potential to join almond, cashew, and coconut milk in dairy alternatives.

WhiteWaves newest product is slightly thicker than plain milk, and tastes like bananas and milk. Given recent data, the company said that it plans to use the Sir Bananas line to ride the growth in the dairy alternatives sector as soy and dairy sales continue to decline. The banana milk line is currently being sold in Colorado, Indiana, Michigan, and Ohio. 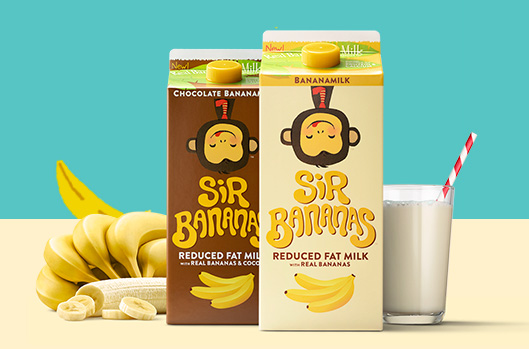 WhiteWave recently spent more than $900 million to buy So Delicious, Magicow, Vega, and Wallaby Yogurt Company. The company said that its company growth, and expanded lines, have served as an increase of $429.7 million in net sales.

AndNowUKnow will continue to have industry and banana innovations as they make it to retails spots near you.

With our pioneering Horizon, Silk, Alpro, and Earthbound Farm brands, The WhiteWave Foods Company made nutritious,...