NORTHERN CALIFORNIA - While the rains continue for Northern California, mudslides and flooding have not been the only product of the uncharacteristically wet weather.

Our reservoirs have also seen a significant boost to water content, according to Mercury News, with upwards of 350 billion gallons accounted for as of the last round of storms. 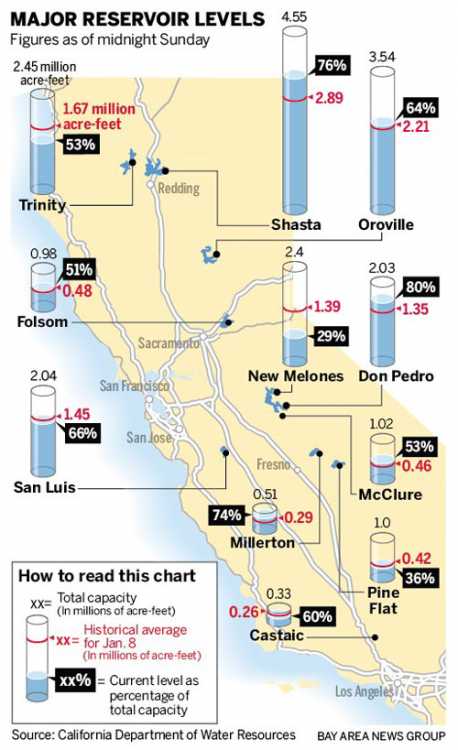 We are now seeing the upstart of yet another pattern. As we reported yesterday, Northern California’s coastal ranges are expected to receive up to a foot of cumulative rainfall, and between two and eight inches of rain are expected throughout the inland Sacramento and San Joaquin Valleys, as the result of what weather experts described as “torrential” rainfall.

While there have been dangerous conditions, the news for the record drought is optimistic.

The report noted that the Sierra Nevada snowpack is currently at 70 percent of historic average, a 126 percent leap from this time of the year, despite weekend concerns that the weather would remove recent progress.

“It’s excellent news,” said Roos. “I don’t make the decision on the official drought, but from the Bay Area north we are in good shape for this time of the season.”

Roos, however, did hold on to caution, stating that it’s still early yet and precipitation patterns could dry up at any time.

The drought does not officially come to a close until Governor Jerry Brown gives the word, and while the northern half of the state is seeing significant water additions, the southern half’s reservoirs are still low, particularly Santa Barbara and surrounding areas.

The report noted that Governor Brown should soon update the drought declaration to include recent regional differences.

AndNowUKnow will continue to report from our home at the state’s capital on this and all other issues affecting the produce industry.