WENATCHEE, WA - Who doesn’t like a good success story? CMI Orchards certainly does, as it prepares for another good year for its Daisy Girl Organics™ brand. 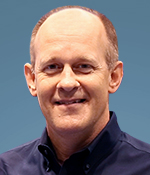 “For the third year in a row, Daisy Girl is the #1 selling branded organic apple in the U.S.,” Vice President of Marketing George Harter said. “It really shows how much consumers trust and are loyal to the Daisy Girl brand. Daisy Girl organic sales for last season, ending July, 2018, show an amazing success story for the brand. Nielsen data shows Daisy Girl sales increased a whopping $5.8 million or up 23% over the season prior. This growth is exceptional with the huge sales base that Daisy Girl commands in the U.S. market. This is the second year CMI’s Daisy Girl brand has generated growth upwards of 20%. Daisy Girl branded variety Kanzi® and Honeycrisp lead the way with extreme increases in distribution and sales.”

CMI Orchards introduced the Daisy Girl Ship’n’Shop display bin during the 2017 PMA. According to a press release, the display bin has proven to be a highly successful merchandising tool in driving sales. 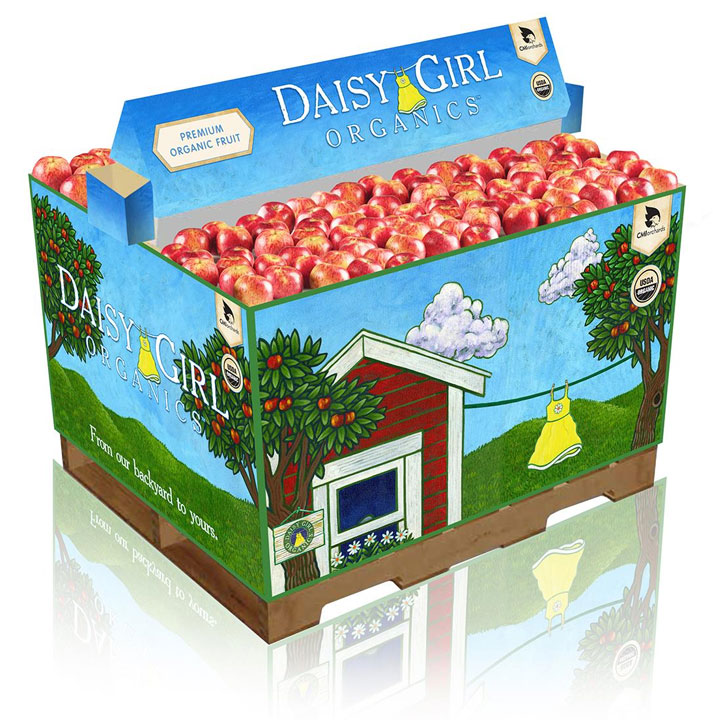 “The pallet display bin ships with 16 cases of organic fruit and is extremely easy to build, creating an instant retail destination for organics,” Harter shared. “Our two-box Daisy Girl display is an industry favorite and has helped drive organic sales throughout our customer base.”

CMI Orchards also reported its organic production ramping up. Organic volumes are projected to increase 67 percent over last year, with plans to expand distribution during the 2018 season. In addition to its Daisy Girl brand, CMI Orchards has recently launched other campaigns to highlight its other organic apples.

“We just launched an exciting organic ad campaign to highlight premium branded organic apples, available in Ambrosia, Kanzi®, Kiku®, Envy™, and Smitten™,” Harter explained. “Visit www.cmiorganic.com to see a case study which demonstrates the effectiveness and success of merchandising using CMI’s Ship’n’Shop bins. One large U.S. retailer generated an increase in sales of 185%. We feel confident that these results can be replicated by any retailer that trials our Ship’n’Shop display.”

“The two-pound Daisy Girl Gala has held the position of #1 branded organic apple—across the entire U.S.—for the past three seasons, with no sign of its success slowing down,” Harter stated. “According to Nielsen data, Daisy Girl has 6 of the top 8 organic 2 lb pouch bag items in the branded organic category, providing solid footing for any customers looking to grow their organic business.”

Harter also noted that one of the often-overlooked benefits to packaged organic apples is the shelf flexibility that packages give retailers. 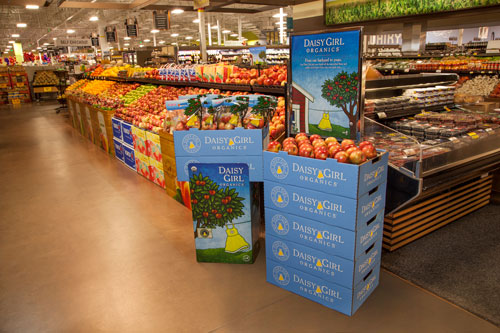 “In the past, co-mingling issues meant organic and conventional apples could not be displayed side by side,” he stated. “Packaging eliminates this issue and our most successful retail partners have discovered that putting a strong organic brand like Daisy Girl pouch bags in a premium up-front position is driving consumer conversions and strong sales gains.”

With striking packaging and a retail strategy, the only thing left to do is fill those bins up!

“The organic apple harvest in Washington is just getting underway with strong prospects for the coming year,” Harter said. “We have increasing organic acreage coming into production to help drive retail distribution and promotions. The number of retail stores continues to grow for the Daisy Girl brand, with Nielsen data showing 10 percent increase in store count for the 2017-2018 season bringing the store distribution total to 13,648.” 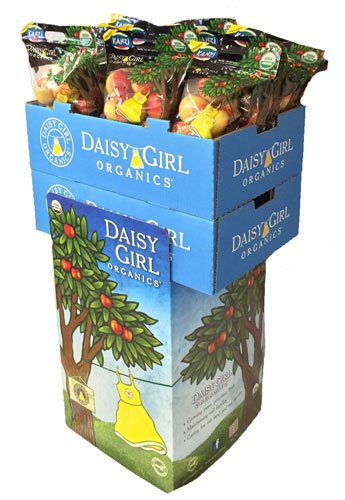 He concluded that CMI Orchards is excited for opportunities this season will afford because of the increase in organic production, organic ad campaigns, and the growing number of stores selling Daisy Girl.

“We have the tools to drive success for any retailer, and we’re eager to line up some promotions to kick-start this organic season in the best way possible,” he finished.

For the latest in fresh produce news, stick with us at AndNowUKnow.