GOODLETTSVILLE, TN - Dollar General reported mixed results upon the close of its financial Q2 for fiscal year 2016, missing on profit and sales expectations but seeing a boost in other areas like diluted earnings per share.

"We are pleased with our 2016 second quarter diluted earnings per share growth of 14 percent over the 2015 second quarter, although our same-store sales performance fell short of our expectations,” said Todd Vasos, the chain's Chief Executive Officer, according to the report. “Retail food deflation and a reduction in both SNAP participation rates and benefit levels, coupled with unseasonably mild spring weather, proved to be stronger than expected headwinds to our business. The competitive environment also intensified in select regions of the country. Importantly, even amidst a challenging sales environment, we effectively managed our gross profit margin and leveraged our selling, general, and administrative expense as a percent of sales."

Despite these points, however, Dollar General saw a sharp 17.63% decline in its stock yesterday, regardless of remaining steady all quarter long and a strong growth stream since the announcement of its intended expansion last March. 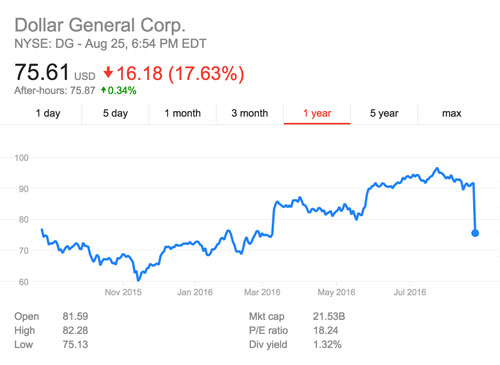 Additional highlight from the quarter included:

Vasos added that moves are currently in place to drive the areas that didn’t meet expectations this past quarter.

"For the second half of the year, we have action plans across both merchandising and store operations intended to drive same-store sales while maintaining strict expense control discipline. Looking ahead, we remain focused on our long-term strategy to invest for growth while also returning cash to shareholders through consistent share repurchases and anticipated quarterly dividends," he said.

As the company continues to look towards meeting its goals and growing its banner, AndNowUKnow will keep you up to date with the latest.