El Niño has Officially Been Declared

WASHINGTON D.C. - El Niño has arrived, according to a report released by the National Oceanic and Atmospheric Administration (NOAA) on Thursday.

The National Weather Service also announced their opinion that the phenomenon has now begun. According to The San Francisco Chronicle, El Niño is a warming of a certain patch of the central Pacific that changes weather patterns worldwide, associated with flooding in some places, droughts elsewhere, a generally warmer globe, and fewer Atlantic hurricanes. El Niño is usually so important that economists even track them because of how they affect commodities.

“Based on the persistent observations of above-average sea surface temperatures across the western and central equatorial Pacific Ocean and consistent pattern of sea level pressure, we can now say that El Niño is here,” said Mike Halpert, Deputy Director of NOAA’s Climate Prediction Center. “Many climate prediction models show this weak El Niño continuing into summer.” 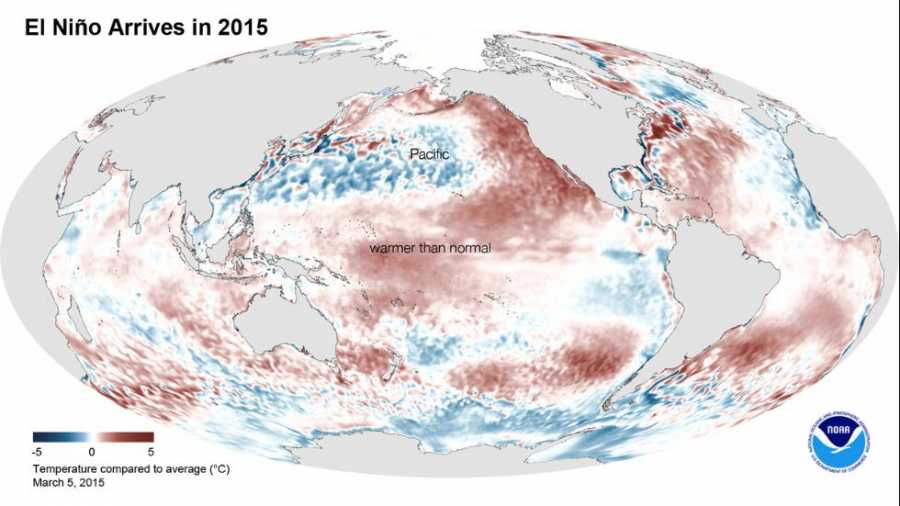 Since El Niño is expected to remain weak, major impacts to weather patterns across the world are not expected according to The Weather Channel. However, NOAA says that some impacts that typically occur with El Niño in the Northern Hemisphere could show up this spring, such as wet conditions along the Gulf Coast of the United States.

Last year, according to The San Francisco Chronicle, some experts were hoping that El Niño would help the southwestern droughts because moderate-to-strong events bring more winter rain and snow to California — even flooding and mudslides during 1998's strong El Niño. But this El Niño arrives at the end of California's rainy season and is quite weak, Halpert told The Weather Channel.

"This is not the answer for California," Halpert said. "The U.S. Southeast may see some above average rainfall, which is typical for an El Niño. What we've learned from this event is that our definition is very confusing and we need to work on it," Halpert continued.

The forecast issued by the Climate Prediction Center branch of NOAA says there will be a 50 to 60 percent chance that El Nino conditions may persist into summer 2015.