Hurricane Newton to Spread Across Mexico and Southwestern U.S.

Already having drenched Mexico’s coastline with 3 to up to 12 inches of rainfall, AccuWeather expects winds of up to 80 mph and 6 to 12 more inches of rain to travel through Baja California Sur and western Sonora through Thursday. 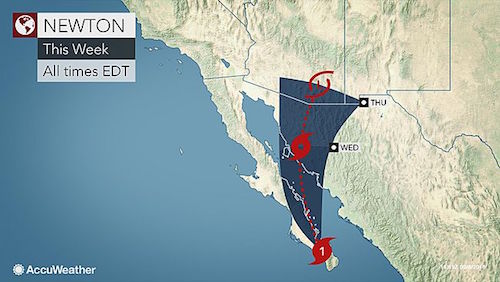 Sinaloa will also see the possibility of flash flooding and mudslides today, with meteorologists predicting more than 6 inches of rain in some areas of the agricultural-focused state. 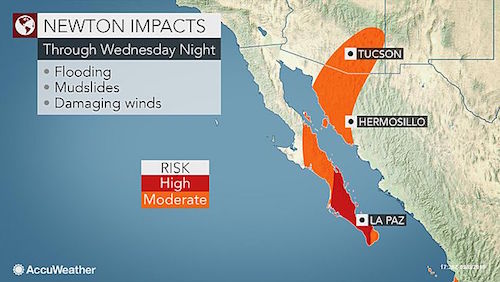 Northwestern cities like Phoenix will likely be on the periphery of the downpours, AccuWeather says, but cities farther east in Tucson will get the brunt of it.

"Tucson averages just 1.29 inches of rain during the month of September, and some areas in and around Tucson could get that much rain in just one day," explained AccuWeather Meteorologist Brian Thompson. "Streams, rivers, and drainage areas can flood quickly with these tropical downpours, so be prepared for rapidly changing conditions into Wednesday.”

As Arizona’s heaviest rain comes to an end tonight, Hurricane Newton will shift towards New Mexico. There, AccuWeather says, flooding will become more localized and downpours will become less intense. 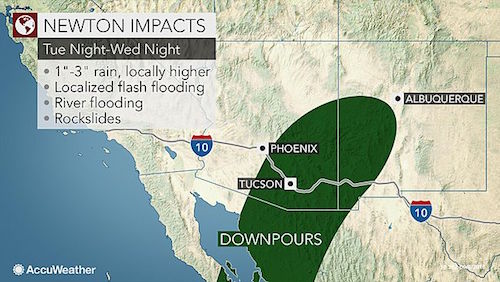 The source names New Mexican cities Gallup, and Truth or Consequences, as among those for flood risk tonight, with the storm moving into Albuquerque at a lesser strength.

AndNowUKnow will continue to follow Newton as it passes through ag hubs in both Mexico and the U.S., so keep watching with us for more.