UNITED STATES - The American Southwest is likely to be the recipient of heavy rainfall and flash flooding this week due to the same storm system that struck the Coast of Baja as Hurricane Odile. Weather forecasters are warning local growers and residents alike to brace themselves.

“The remnants of Odile should continue to move toward the northeast or east-northeast, across the extreme northwestern Mexico tonight, and across southeastern Arizona on Thursday, ahead of an eastward-moving, mid-latitude trough, currently approaching western Baja California,” the National Hurricane Center said in an official statement. “Heavy rainfall and flooding associated with the remnants of Odile will continue to be a significant threat across northwestern Mexico and the southwestern United States during the next couple of days.” 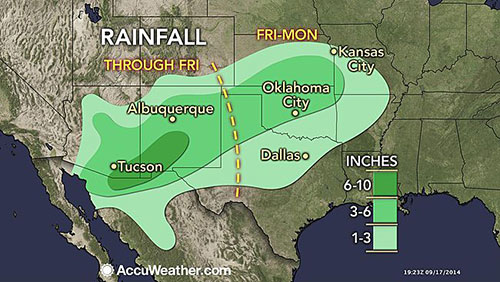 “The remnants of Odile are expected to produce rainfall amounts of 3 to 5 inches with isolated totals of 8 inches across the state of Sonora in northwestern Mexico...southeastern Arizona...and Southwestern New Mexico...possibly extending into western Texas through Friday,” the report went on. “These rains could result in life-threatening flash floods and mudslides.”

In the hardest hit areas, a swath of land encompassing the area to the southeast of Tuscon, Arizona and extending into southern New Mexico, AccuWeather Enterprise Solutions Senior Vice President Mike Smith warns that, "Rainfall amounts can exceed 10 inches."

At this point in time, it is still too early to project just how large an impact this tropical storm system will have on the growers of the Southwest. I know that I speak for everyone with AndNowUKnow, however, when I say that I hope any damage done is minor and that the industry can make it through this event without serious harm coming to either farmers or their crops.

Stay tuned to AndNowUKnow for any further updates on this storm, as well as future weather updates relevant to the fresh produce industry.