MCALLEN, TX - The Texas Produce Hall of Fame was established in 1988. Since then, 143 living and posthumous awards and 23 Scott Toothaker Awards have been given to men and women who have contributed to the betterment of the produce industry throughout Texas. On January 27, seven leaders of the Texas produce industry will be added to that legacy and honored this year at the Texas International Produce Association’s Hall of Fame Banquet.

According to a press release, the seven inductees to be honored as leaders among the farming or sales industry of fresh produce in Texas will be: Kathy Reavis, Aquilies J. Garza, Charles La Grange, Jimmy Pawlik, and Lawrence Kroman. Posthumous awards will also be given to honor Harold Macomb and Ross La Grange. 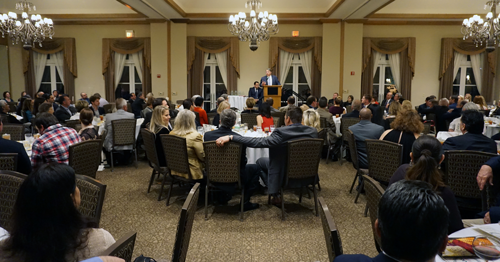 The Hall of Fame is held every other year and is considered one of the most treasured events. This banquet provides the opportunity for today’s industry members to pay tribute to the leaders and role models who paved the way for future generations in the produce industry. In addition, the banquet also serves as a fundraiser for the William E. Weeks Agricultural Scholarship, established to encourage future generations to carry on the hard work of our past leaders and pursue education in the field of specialty crop agriculture.

Congratulations to all the winners at this year’s event! For more exciting news in the industry, keep up with us at AndNowUKnow.