CINCINNATI, OH - Today is a good day for Kroger and its ongoing efforts with its Restock Kroger campaign; the company announced its third quarter’s 2017 fiscal results, and it looks to be enjoying large net earnings. When faced with the constantly evolving and competitive market, Kroger seems to stand down for no business.

With so much success and growth in the face of a market always vyying for new ways to woo consumers, Kroger's success comes from many different angles of its business.

"Restock Kroger is off to a great start. Customers are recognizing our efforts to redefine the customer experience and rewarding us with their loyalty. We continue to accelerate our digital and ecommerce offerings, to grow Our Brands, to lower prices for customers, and to invest in our associates,” said Rodney McMullen, Chairman and CEO, in a recent press release. “The holidays are always Kroger's time to shine. In fact, we had our best ever Black Friday results for general merchandise, led by record sales at Fred Meyer. Everything we are doing revolves around our associates providing friendly service and fresh products to our customers. This quarter shows that by investing for the future, our business continues to improve and gain momentum. We remain confident in our ability to continue to grow identical supermarket store sales and market share for the balance of the year and in 2018." 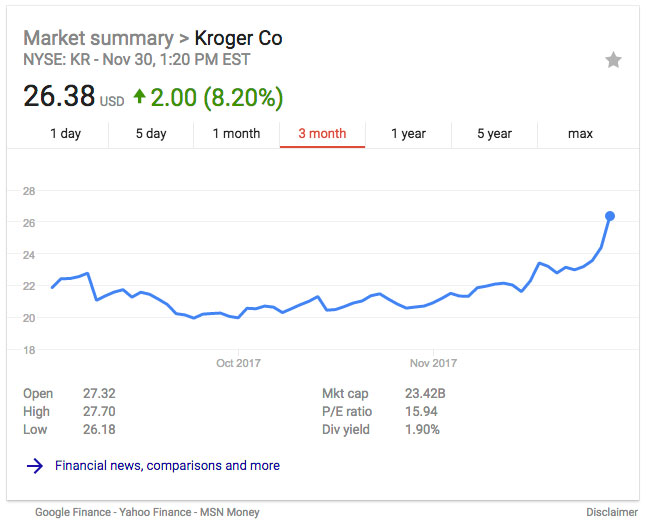 According to the press release, the following stats detail its third quarter success:

The press release's success story is also vindication that the company's Restock Kroger efforts were worthwhile pursuits, as can be seen in the following highlights from its Third Quarter 2017:

It appears that not everyone was a true believer this holiday season. After speculation from anaylists who were initially leery of the company's success when positioned against industry titans such as Amazon and Walmart proved to be mistaken, Reuters reports that shares shot up to 13.6 percent.

Want more details on how Kroger managed to do so well this holiday season? Check out their full press release here, where you can also locate its plans moving forward.

For more fresh produce industry news, keep checking back with us at AndNowUKnow for the latest!