GRAND JUNCTION, MI – With local growers working to ensure that blueberries are picked, packed and distributed, the Michigan blueberry harvest is about to go into full swing.

South Haven Mayor Bob Burr helped kick off the local harvest, according to a press release.  He, Archie Armino of Wal-Mart and Bob Hawk, President & CEO of MBG Marketing, a grower-owned cooperative and founding partner of Naturipe Farms, visited the Fritz family of Brookside Farms.

“This is a crucial time of year for our local family farmers,” stated Mayor Burr. “Our local and regional economies rely on a successful harvest season and it is a source of Michigan pride when we start to see our blueberries ripen and prepared to be shipped throughout the country.” 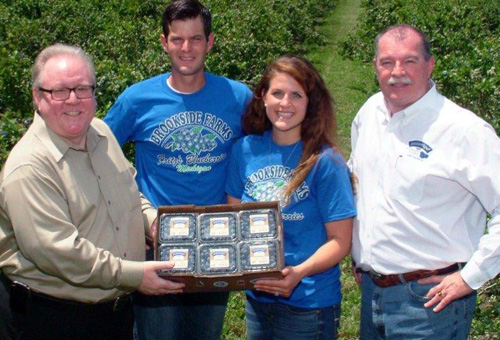 Cousins Peter Fritz and Carly Fritz Parsley, third generation blueberry growers, gave a tour of their home farm in Bloomingdale, Michigan.  When asked about this year’s crop, Peter said that the unseasonably cold winter was thought to pose a significant threat on the crop, but the plants have rebounded well.  Bob Hawk added, “Certain varieties fared better than others. However we are pleased with how the bushes have bounced back this spring and are looking forward to another great year.”

To help promote the health and taste of blueberries, MBG Marketing and Naturipe Farms are working with the Michigan Ag Council to sponsor the Pure Michigan program. “The locally grown movement has made tremendous strides to highlight the importance of supporting our local agricultural sector and the positive impact it has on our economy,” said Bob Hawk. “We are especially pleased to be working with local retail customers, including Wal-Mart, who highlight the heritage, traditions and contributions made by the family farms in Michigan.”

Wal-Mart plans on doubling the sales of locally sourced produce in the U.S. and has partnered with MBG Marketing to feature 11 of its family farms with in-store signage throughout Michigan Wal-Marts this summer, according to a press release.  “Wal-Mart is committed to the farmers who grow our food and supports the in-season locally grown products such as these healthy, flavorful Michigan blueberries,” said Armino.

Michigan is the number one state in highbush blueberry production.  Its growers produce over 100 million pounds of blueberries every year.