OROVILLE, CA – As California acclimates to one of the wettest winters in our recent history, acting Director for the California Department of Water Resources, Bill Croyle, is vowing a working spillway for the Oroville Reservoir before next winter.

“If I have anything to say about it, we’ll have a spillway to use by Nov. 1,” said Croyle in address to the press, according to SF Gate. “Whether that’s a permanent or temporary structure is still to be determined.”

As we previously reported, the Oroville Dam that protects the reservoir, the second-largest in the state, sustained damage to both spillways as the waterway became the fullest it has been in years.

As for how the department plans to fulfill this promise, Croyle said the strategy would be unveiled if not later this week, then by early next.

The project is an undertaking; Croyle acknowledged in his address that repairing a roughly 3,000-foot-long spillway in just over seven months is a tight timetable to set. However, a memo from engineering consultants on the damage said that a “very significant risk would be incurred if the gated spillway is not operational by Nov. 1.” 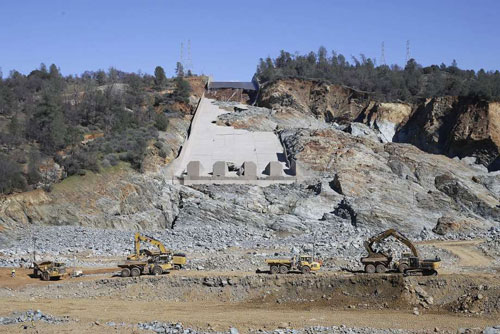 While those on the job found that the damaged spillway could not be replaced this year, they determined enough repairs could be made by winter to keep it both safe and functional.

Most recently, dam managers were able to get the overflowing reservoir down to 837 feet above sea level after 10 days of sustained releases. According to the report, California officials consider the 860-foot level Lake Oroville’s maximum capacity to safely absorb snowmelt.

The next step once a plan has been chosen for the repairs is to accept bids for the project in order to select a contractor. When that contractor and the department agree on a final plan, construction can finally begin.

AndNowUKnow will continue to follow this and other key events influencing the industry.