NORTHWEST, U.S. – With the wet season ramping up as summer fades, the Northwest is the next region of the U.S. to prepare for the brief arrival of wet weather. The string of coast from Northern California up to Vancouver will experience severe impacts from Pacific storms over the weekend. 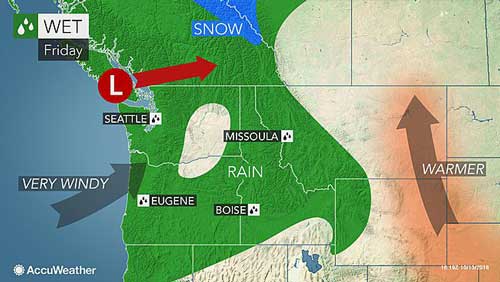 The first storm is set to arrive on Friday night, according to AccuWeather, bringing heavy rain and wind along Interstate from Redding, CA, to Seattle, WA. Weather officials expect instances of flooding to only occur on a local level. As we previously reported, this rainfall will be experienced as low as San Francisco and Sacramento.

Authorities expect Friday’s storm to make poor traveling conditions, with wind gusts ranging from 40 to 60 mph, and even reaching 80 mph along the coast and over the mountains in the region. 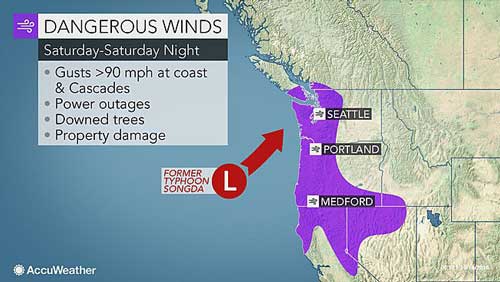 As the first storm fades, a second storm will affect the same regions from Saturday through to Sunday. AccuWeather stated that this storm, although not tropical in nature, will have strong effects that can occur during forms of more severe oceanic weather like with hurricanes. 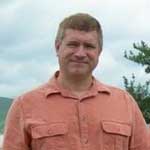 AccuWeather Senior Meteorologist Alex Sosnowski stated that gusts from 75 to 100 mph can occur in some places on the coast, with power outages likely. Affected areas are likely to experience flooding from several inches of rain.

"The heaviest rain and highest winds will come onshore Saturday afternoon along the Washington, Oregon, and northern California coasts," according to AccuWeather Senior Meteorologist Dan Pydynowski. "A general 2 to 4 inches of rain will fall across the region, with higher amounts in the coastal ranges." 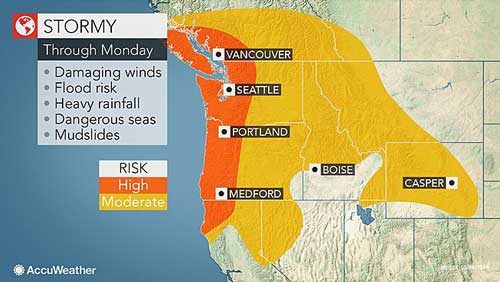 Authorities expect rainfall to continue throughout Tuesday of next week, although heavy winds and other such weather effects are expected to die down after Sunday. Travel is expected to slow for road transportation and travel, but no airports have yet declared expectations for closures or delays.

As the storm passes through, AndNowUKnow will unveil any relevant announcements for the industry.