GAINESVILLE, FL - Y’know the thing about a gator, he’s got lifeless eyes, black eyes, like a doll’s eyes. When he comes at ya, doesn’t seem to be livin’...until he bites your melons. In Florida there exists a Jaws-like menace in the form of an alligator who has a preference for watermelon—and no picnic basket is safe.

According to The Epoch Times, Trevor Walters and his fiancé Taylor Forte were sharing a picnic, soaking in some sun, and all-around enjoying life, when an alligator, let’s call him Greedy Gator, came upon the Floridians and made a beeline for the watermelon and charcuterie.

“He swims up to the bank and just looks us dead in the eyes and then he immediately just sprints up onto the beach,” Walters said to CBS4 Gainesville.

As soon as the gator charged, the couple quickly beat feet and watched, helplessly, while Greedy Gator helped himself to their feast, which included cut watermelon, a whole block of cheese, salami, and a bowl of guacamole—yes, I said bowl. 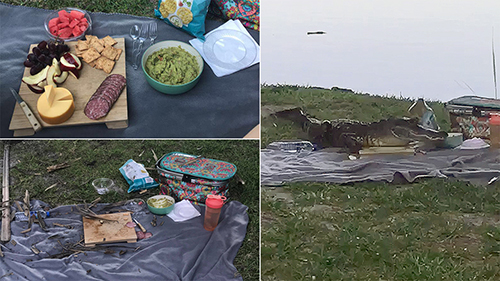 “The worst part is we had a big bowl of guac made,” Walters explained. “He eats the whole bowl. He put the whole bowl in his mouth.”

The Florida Fish and Wildlife Conservation Commission suspects that Greedy Gator had likely been previously fed by humans, causing him to become less wary of people by associating them with food. I can’t imagine a worse nightmare than a gator associating me with food, but Walters, thankfully, was prepared to fight back, and successfully drove Greedy Gator back into the water.

“I learned this back in my childhood to scare bears you get up and make yourself big,” Walters told CBS4 Gainesville. “Make a lot of noise. It’s called the bear scare.”

What next, Florida? Gators going after cantaloupe? Honeydew? Cassava?! AndNowUKnow will continue to report on produce-stealing pests.