TEXAS - Persistent waves of rain and storms have brought flooding to historic levels, bringing rain totals to highs of up to 16 inches.

"One to three month's worth of rainfall [will fall] in a matter of days and hours," explained AccuWeather Chief Meteorologist Elliot Abrams said, adding that the rain will only worsen the flooding that has already taken place across parts of southeastern Texas. 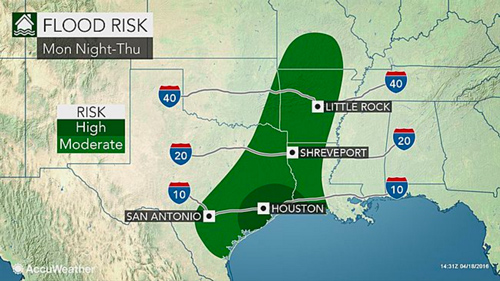 Nearly 4 inches of rain fell in one hour at Houston George Bush Intercontinental Airport early Monday morning, with some locations in the northwestern part of Houston receiving 7-14 inches of rain and triggering several high water rescues and road closures.

“Houston has been pummeled by torrential rainfall. There are reports of up to 16” in some areas in the last 12-24 hours, with many areas seeing at least a foot or more of rain in the last 18 hours,” says Bret Erickson, President of the Texas International Produce Association. “The weather has also created some problems with transportation and logistics getting up and though the major metropolitan areas of Houston and surrounding areas.”

So what will that mean for the state’s thriving growing regions? It’s too early to tell exactly how different categories will fare, but peaches, watermelons, and onions may see some contact with the storm. 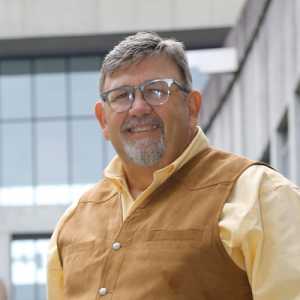 “Texas Hill country peaches are due to come off in May, and Texas watermelons on the Eastern Side of the state could certainly be pushed back by the flooding,” says Tommy Wilkins, Grow Farms’ Director of Sales. “The worst part this storm is supposed to hang around for the next 3 to 4 days, and now the onion guys are carefully watching to see how much comes in.” 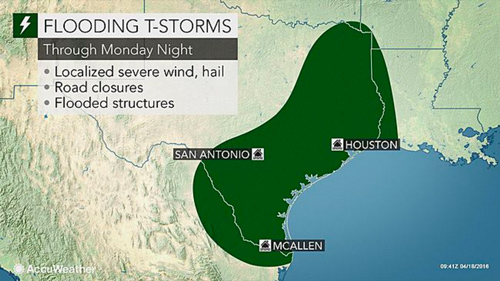 Bret also added that the Rio Grande Valley was put under a flash flood warning last night, saying that as of Monday evening the area had not seen any rainfall, but they are sitting tight and hoping for the best. There are still some onions that have yet to be harvested, Bret continued, and has onion growers a little worried, especially since markets have been positive as of late.

According to AccuWeather, the increasingly saturated ground will cause any more rainfall to lead to additional flooding problems.

Thunderstorms, and localized wind and hail are possible across portions of central, southern, and eastern Texas through the middle days of the week, AccuWeather says. As the storm shifts eastward, rain and storms will become more scattered and less intense, with drier weather projected to by the end the week.

As AndNowUKnow learns more about the results of these storms, we will continue to update you on the latest.