UNITED STATES – It may be hard at this point to differentiate all of this year’s extreme winter storms, but This. Is. Sparta!

Winter Storm Sparta took shape over California last Saturday, bringing rain and snow to the Golden State and much of the Southwest.

According to USA Today, parts of the Sierra Nevada received between 12-18 inches of snow. It is forecasted that through the end of today, more than a foot of snow could fall through the San Bernardino and Angeles national forests. 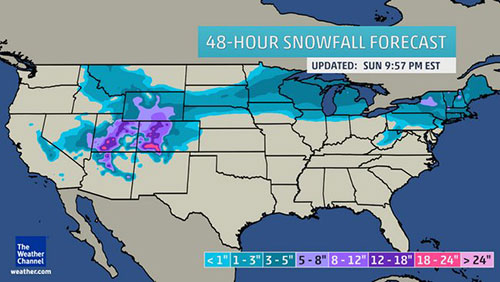 Sparta also brought snow in 49 out of the 50 states, causing nearly 8,000 flight delays and 2,400 cancellations across the United States as of last night, according to Flight Aware. 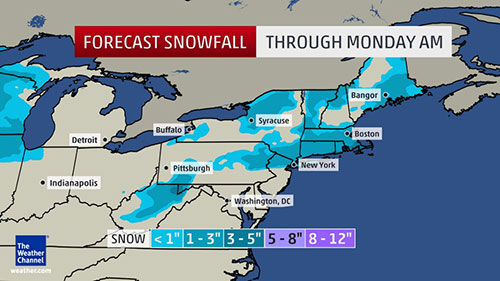 This winter weather is far from over. The Weather Channel is now forecasting that Winter Storm Thor is right on Sparta’s heels, bringing more snow, sleet and ice. It is expected to continue to spread eastward across the Plains, Midwest and Northeast through midweek. 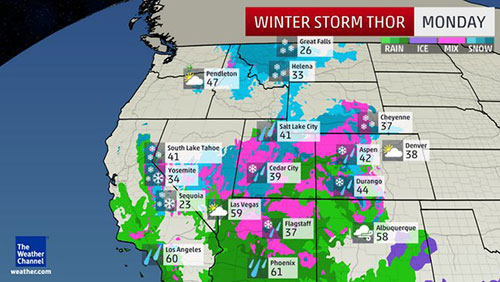 The heavier and more persistent snow is expected over the southern Rockies, including the San Juans and Sangre de Cristos of Colorado and New Mexico, the Mongollon Rim of Arizona and canyonlands of southern Utah.

As the storm travels across the country, it is expected to be warmer than last week’s winter storms, but cold conditions will still be in place in the Upper Midwest and Great Lakes, both of which are forecasted to receive moderate snowfall accumulations.

The Weather Channel also expects that the lingering cold air in the Ohio Valley and Mid-Atlantic will allow the precipitation to begin to fall as freezing rain, sleet or a mix of rain and snow.

Rain and thunderstorms are forecasted south of the snow from the Gulf Coast to Missouri eastward into Kentucky.

For now it is uncertain how far north the snow, ice and rain will go. Stay tuned to AndNowUKnow for the latest on this year’s volatile winter weather.