Banana Truck Bursts into Flames Along I-80 in Pennsylvania

MERCER COUNTY, PA – Inclement weather resulted in a series of accidents and, ultimately, caused a banana truck to burst into flames along a stretch of 1-80 near Shenango Township last week.

According to local news source New Castle News, lake effect snow bands caused slick roads and poor visibility in the early hours of Friday, December 16, and led to a series of unrelated accidents that clogged traffic and exacerbated dangerous driving conditions. Shortly after 7am, a semi-truck hauling bananas caught fire as it attempted to negotiate the treacherous stretch of interstate.

“The truck’s back end was fully engulfed when we got there,” explained Shenango Township Fire Chief Bill Williams.

Upon his arrival, Williams ordered the highway closed from the Ohio border to Exit 4A and rerouted traffic through Mercer and neighboring Hermitage and Sharon. Williams and his crew had just left a similarly dramatic accident in which a snow plow truck had rolled into a ditch along Route 318 in the Township. 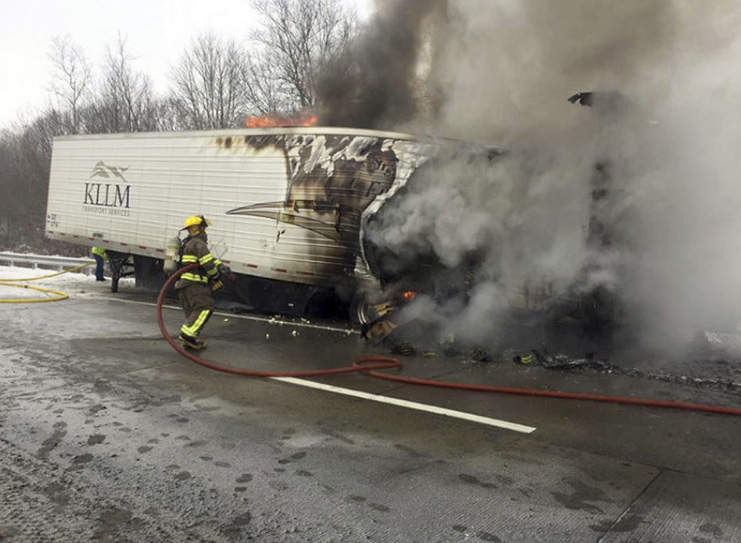 "You can't work out there with icy roads and jeopardize peoples' lives,'' Williams said. "I know people didn't like it when we closed the road. But people never like it when it closes.''

Williams believes the banana truck most likely caught fire as a result of the vehicle’s overheated brakes setting fire to its tires. Tires, the Fire Chief noted, give off a tremendous amount of heat, “and you have to remember, a truck has eight tires.”

By 2:30pm, the fire was extinguished and the highway was eventually reopened. Though the truck driver was uninjured, the truck and its contents were completely brûlée.