UNITED STATES - Travelers across the United States are ramping up for one of the country’s most pivotal holidays of the year: Thanksgiving. Given that the tradition gathers all family members around a single dinner table, many Americans have already begun their holiday trekk. Meanwhile, Mother Nature’s stomach is rumbling in anticipation of massive storms expected to strike the western and central regions of America. Not only will this disrupt holiday travels, but it will impact our fresh fruit and vegetable supplies well past the Thanksgiving holiday.

According to npr, the National Weather Service (NWS) is painting a picture of stormy skies from California to Michigan, beginning yesterday evening and expected to last through Friday morning PT. Yesterday, we released a Weathermelon report that detailed multiple growing regions in California that will be hit by the initial storm, including Salinas, Oxnard, and Santa Maria. By Thanksgiving, these regions are likely to see over a half inch of rain and temperatures as low as 33 degrees. Moreover, several states in the Central U.S., such as Wyoming and Colorado, have already reported 30-plus inches of snow. But it doesn’t stop there—another storm is currently in the works, expecting to drop roughly a foot of snow across the country on Thursday. 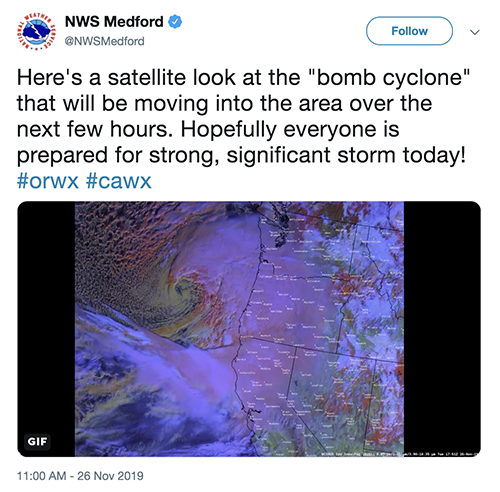 The strongest storm, however, is moving in on us from the Pacific Ocean, according to the NWS. Creeping up on Oregon, the storm is expected to develop into a bomb cyclone, which means it is intensifying at an unusual rate. This will bring about blizzardy winds across the West Coast and two to four inches of snow in the Sierra Nevadas. As our local ag reservoir, the Sierras are completely tapped at the moment, and we’ll see this reflected in harvests through the year’s end. The northern-born storm will then move inland, threatening to bring flash floods to several of our Southern California growing regions.

Hunker down and hold tight to your gratitude, for this storm is sure to rock America’s proverbial boat. To see how growers fare following this massive storm, stay tuned to AndNowUKnow.