CALIFORNIA – As the rest of us prepare for the end of the week on the West Coast, rain and possible thunderstorms are beginning to make an appearance, with the potential of extending a few more days.

In a wide sweep of weather, California as a whole will be affected by a string of rain and storms which will provide some optimisim to the drought-afflicted region. AccuWeather.com reports that the bulk of the rainstorms, which began on Thursday, will hit on Friday and run through Saturday. 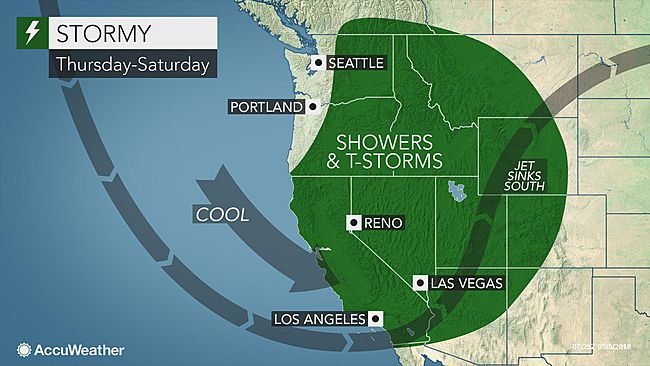 Beginning in the northern half of the region, storms will expand across central and southern California before moving into Nevada, Utah, and Arizona. AccuWeather Meteorologist Brandon Zapolski said in a statement that while the storms are not expected to be particularly severe, affected communities should still be prepared for sudden downpours, high wind gusts, and small hail.

Officials have stated that flash flooding is possible over the next two days, with possible delays at airports throughout California. Also expected in the more desert-like areas of the state and southwest, are dry thunderstorms.

While meteorologists hail the upcoming rainfall as a needed combatant to the drought still afflicting California, officials are still leery of the prolonged impact of the storms.

"A long-term drawback will be that the rainfall will spur growth of small brush," stated AccuWeather’s Senior Meteorologist Alex Sosnowski. "As this brush dries out over the summer, it could become the fuel for wildfires later on."

For the most part, continued officials, despite some flash-flooding the storms will not be a washout. The storms are expected to expand further into the southwest states into the end of the weekend.

Keep your umbrellas handy and your inbox prepped, as AndNowUKnow continues to cover these California storms and other weather changes throughout the nation.