Dangerous Storms Bring Flooding and Mudslides to California and Its Neighbors

CALIFORNIA - Flooding and dangerous conditions will continue to hit California into the middle of this week, with a succession of storms unleashing what AccuWeather is describing as “torrential rainfall” and substantial snow.

"Periods of rain and mountain snow will follow on Monday, especially in northwestern California and the Sierra, before the next heavier round slams into northern and central California Tuesday into Tuesday night," AccuWeather Senior Meteorologist Kristina Pydynowski said. 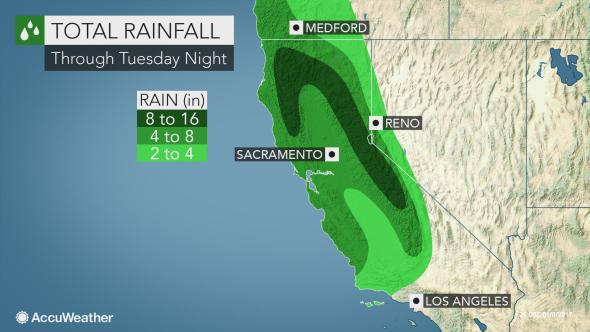 Northern California’s coastal ranges are expected to receive up to a foot of cumulative rainfall, and between two and eight inches of rain are expected throughout the inland Sacramento and San Joaquin Valleys.

And while the drought-stricken region is in need of rain, the sheer volume of rainfall threatens to saturate soil and trigger more and more urban flooding, mudslides, and rockslides throughout the week—many incidents of which have already occurred.

"Rivers and streams that flow out of the Sierra into the lower foothills and valleys on California and also into western Nevada will likely see the worst flooding in a couple of decades," AccuWeather Senior Meteorologist Ken Clark said, noting: "The greatest potential for destruction comes from the rivers that have little or no flood control, such as dams and catch basins."

Evacuation orders may be required in some communities, as well as traffic advisories and closures due to water, snow, and debris in roadways. 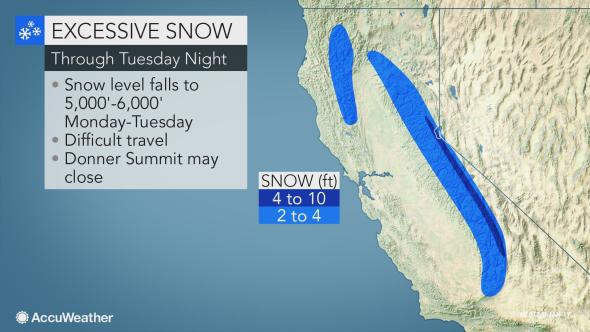 Snow is expected to fall as low as 5,000 to 6,000 feet into Wednesday, making travel through northern coastal ranges and the Sierra Nevadas extremely dangerous.

Pydnowski did note that the storms will eventually provide “a boon for the ski industry and for the region’s water reservoirs.”

By the end of the week, the lion’s share of moisture is expected to move north into Washington and Oregon.

How will traffic troubles and flooding in important central California growing regions affect the industry? Check back with AndNowUKnow for updates.