WATSONVILLE, CA – There’s more than just quality fruit that goes into maintaining a sought-after brand in consumer eyes. With berries that are continuously craved by today’s shoppers, Driscoll’s knows that mentality well. The company has announced a new campaign to further exemplify the strength of its brand and selections, adding the new, nationwide #BerryTogether initiative to its history of successful communication strategies.

As Frances Dillard, Director of Marketing and Global Brand Lead at Driscoll’s, recently told me, this new campaign builds on a promise undertaken by the company, with a new twist to tap into consumer demand.

“Last year, Driscoll’s announced one new global brand strategy that unified North, America, Europe, Australia, and China,” Frances tells me. “This year, we are continuing to evolve our brand strategy from a functional fruit, to one that creates a stronger emotional connection of happiness with our berries.”

Driscoll’s launch campaign #BerryTogether came to fruition through a unique and fun approach called experiential marketing; a trend that connects its brand directly with consumers. Combining live and in-person experiences with digital extensions, #BerryTogether is an integrated campaign designed to bring people together–right in line with Driscoll’s long-term focus.

The first U.S. communication strategy since its unified global visual identity system was unveiled, the #BerryTogether campaign will kick off in the raspberry-devout Twin Cities. The company will offer a 3D experiential art installation that will require people to come together to receive a berry reward, further reinforcing that berries are best when shared. Footage captured during the authentic interactions can be viewed here.

Driscoll’s will also host a national #BerryTogether sweepstakes, highlighting photos of favorite berry moments between family and friends. To enter, consumers need merely to use the hashtag #BerryTogether on Instagram or Twitter for a chance to win a family vacation to the rich soil of California.

“At the core of everything we do, is to deliver on our brand promise of ‘Only the Finest Berries,’” Frances says. “Our campaign further differentiates Driscoll’s in the marketplace as it taps into the power of our brand advocates to drive it. As the brand leader in fresh berries, we are fortune our consumers are willing to share the berry joy through all digital touch points including social media.” 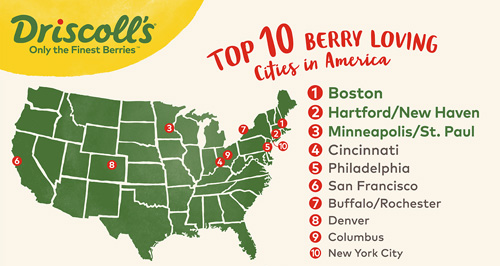 In tandem with the new campaign’s launch, Driscoll’s also released the top 10 berry-loving metropolitan areas in the U.S. This syndicated category data reported by The Nielsen Company, indicated that Boston, Hartford-New Haven, and Minneapolis-St. Paul were the top three most berry-adoring markets in the country. The Twin Cities obtained top spot as the raspberry consumption capital of the U.S. with families enjoying 132 percent more fresh raspberries per household than the national annual average.

According to Driscoll’s research, other top markets included Cincinnati, Philadelphia, Buffalo/Rochester, Denver, New York, and more. Together, these 10 areas consume nearly 400 million pounds of fresh berries, more than 25 percent of America’s total berry consumption. Driscoll’s states that with national retail sales for all fresh berries continuing to grow at 7.6 percent and leading all produce category sales over the past five years, American’s continuously discover the joy in berries.

“We’ll have more fun surprises across the country in the coming month, so stay tuned!” Frances finishes.

Watch the video of the Driscoll’s social experiment in the Twin Cities when you visit here, and find more information on #BerryTogether and the top 10 berry-loving metro areas.

As Driscoll’s continues to innovate in the marketplace, stick with AndNowUKnow for all the latest.