SACRAMENTO, CA - Governor Jerry Brown has weighed in, ruling that California’s drought is no longer in a state of emergency. Following a season of record rain and snow, the state’s soil has finally seen some relief—but will it be able to last through the coming dry season? With proper conservation, California is hoping the answer is yes.

“This drought emergency is over, but the next drought could be around the corner,” said Governor Brown in a statement. “Conservation must remain a way of life.”

With Executive Order B-40-17, Governor Brown lifts the drought emergency in all California counties, with the exception of the following:

These four counties are working on emergency drinking water projects, which help address their diminished groundwater supplies, according to a press release. 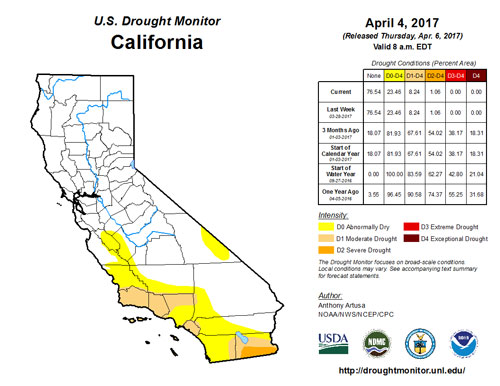 As of now, the order stands that the State Water Resources Control Board will maintain urban water use reporting requirements and prohibitions on wasteful practices such as watering, hosing off sidewalks, and irrigating ornamental turf on public street medians.

The full text of the new executive order can be found here.