SOUTHWEST, USA - As news hits of some late snow to come in the northern parts of California, the southern part of the state, as well as Arizona and New Mexico, will experience one of the initial heat waves of the season this weekend.

"The peak of the heat in many areas will be on Monday, but Sunday and Tuesday will be no slouches either in the high heat department," Ken Clark, Western U.S. Expert at AccuWeather, commented in a recent report. He explained, "When a ridge of high pressure like this one forms in the middle to late June, it can deliver some of the hottest weather possible to the Desert Southwest."

AccuWeather said that temperatures could approach all-time record highs, possibly hitting between 10 to 20 degrees Fahrenheit above average through Tuesday.

Among the specific areas affected will be:

Travel on the streets and in the air could be affected by the weather, Clark said. "Flights could be affected at major airports, including Sky Harbor in Phoenix and McCarran in Las Vegas, as the extreme heat makes it harder for planes to get lift.” 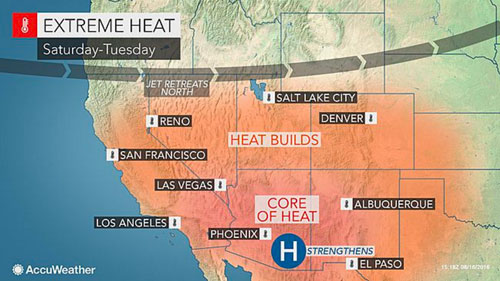 On the road, those traveling at high speeds during the peak heat of the day should use caution because tire blowouts often occur on hot asphalt, with a possible danger of roadways buckling due to heat.

While temperatures will remain warm after Wednesday, the highest heat is predicted to break by middle of next week, with everything balancing out to normal numbers.