LAS CRUCES, NEW MEXICO - An age-old philosophical question: Can one celebrate the oncoming of autumn without pumpkin spice products? According to this new type of jalapeño, perhaps not. For those of us living in the dark, Gastro Obscura reported on pumpkin spice jalapeños, and I can’t tell if we’ve gone too far or if we haven’t gone far enough.

A truly divisive flavor, pumpkin spice inspires either adulation or disgust, but I’m afraid there isn’t an in-between. For those desperately waiting for Starbucks to announce that pumpkin spice has returned, I’m afraid this pepper won’t suffice as a supplement. It might have the same orange hue, but that’s where the resemblances end. Alas, this pepper won’t taste of cinnamon, clove, and nutmeg, to the disappointment of PSL fans everywhere. The name stems entirely from the color, a nod to how popular those lattes really are. 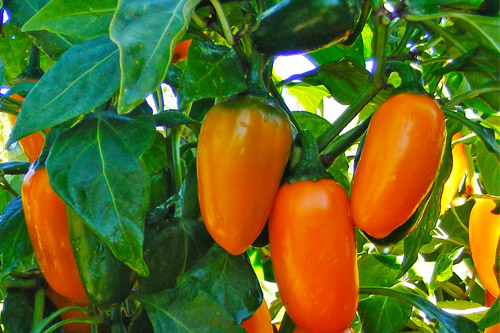 Developed by researchers at New Mexico State University’s Chile Pepper Institute, the pumpkin spice jalapeño pepper is one-third of a trio of peppers specifically developed for their bold colors. The NuMex Pumpkin Spice Jalapeño—its proper title—was created in 1995 with the express goal of creating a striking hued pepper, although in my opinion, how hot it is should garner attention, too. On the Scoville scale, the NuMex Pumpkin Spice Jalapeño comes in at 80,000 Scoville Heat Units—10 times hotter than the usual jalapeño.

What it lacks in pumpkin spice flavor, it makes up for in heat. Otherwise known as this season's alternative to warming up by the fire.

For the latest in produce innovation, keep reading AndNowUKnow.