OAXACA, MEXICO - Southern Mexico saw a strong earthquake early Sunday, May 9th, hitting at a depth of 24.4 kilometers, or just over 15 miles.

The shakeup registered at a 5.9 magnitude on the Richter scale and was felt as far as Mexico City, nearly 300 miles away. The hit was enough to sway buildings and send some locals rushing to the streets, Reuters reported, though Mexico City Mayor Miguel Angel Mancera said there were no reports of damage or injuries. 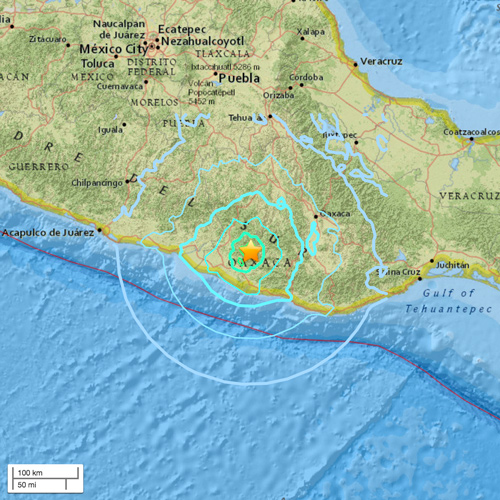 The response is understandable, however, considering the area just saw a series of volcanic eruptions in recent weeks. As we previously reported, the last was enough to shut down air traffic and closed roads as ash blanketed the region.

Connections between the eruptions and the earthquake have not yet been reported.

According to the USGS, the following nearby places were impacted by the earthquake:

Luis Felipe Puente, the National Head of Emergency Services, took to Twitter to reinforce that no immediate reports of damage in much of southern Mexico had been received, including the Puebla, Chiapas, and Guerrero states.

We will continue to follow this and other natural occurrences that could influence the produce industry as more details develop.