WASHINGTON, DC - The dawning of the era of digital has in many ways propelled us forward with a new tool for doing business. But, as the Wild West of marketplaces, there are a few kinks that still need ironing out, namely sales taxes.

Currently, thanks to Quill v. North Dakota, states can only demand sales tax from retailers with a physical presence in that state. South Dakota, however, believes that this law has blocked it from collecting billions of dollars in sales-tax revenue from online retailers and, as a result, is going before the Supreme Court today, April 17th, in South Dakota v. Wayfair, to overturn the previous case and constitutionally impose sales taxes on out-of-state e-commerce businesses. This news breaks weeks after President Trump took to Twitter to share his concerns with Amazon and its alleged failure to pay taxes to local and state governments. 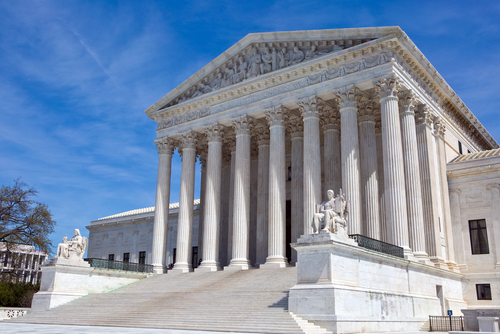 According to a report by CNBC, those seeking to overturn Quill, including President Trump, believe South Dakota v. Wayfair is one way to force major e-tailers like Amazon to pay more sales taxes. However, according to briefs in the case, many online retailers, including 19 of the 20 largest, already collect taxes and the case may instead hurt small businesses.

“Imposing the disparate requirements of 12,000 tax jurisdictions…would effectively be a barricade across the Internet superhighway for thousands of companies, who would need to curtail their ambitions and limit their prospective markets,” George S. Isaacson, lawyer, wrote in the company’s brief.

According to a report by The Washington Post, despite Trump’s criticism that Amazon is avoiding its tax obligations, Amazon now collects sales tax in all 45 states it sells in and so do other major retailers like Walmart, Target, and Apple.

Is the Supreme Court #TeamAmazon or #TeamTrump? And how will these proceedings rock the realm of online grocery? AndNowUKnow will continue to report with the latest.