Tropical Storm Matthew Could Be the U.S. Gulf Coast's Next Hurricane

CARIBBEAN - Tropical Storm Matthew, officially named this morning, could be the U.S.’s next hurricane by next week.

"Matthew will take a westward path across the central Caribbean this weekend, where strengthening to a hurricane is possible," AccuWeather Hurricane Expert Dan Kottlowski said in a recent report.

For now, Matthew has ag areas like Cuba, northern Venezuela, Colombia, and the Dominican Republic on alert for what the system could grow to be by Sunday, with a potential path towards the U.S. this weekend.

"A northward turn is not out of line with climatology with systems in the Caribbean during this time of the year," Mike Doll, AccuWeather Tropical Meteorologist, said.

Whether or not Matthew will make it far enough to bring its rain and wind to the U.S. Gulf Coast, or the Atlantic Seaboard, will be determined by how far west the system makes it in the coming days. 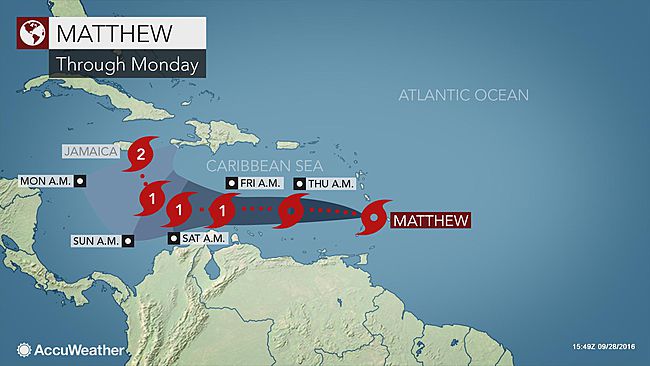 Additional, but more remote, trajectories for the weather pattern include continuing its path west into Central America, and what AccuWeather reported as a “very abrupt” turn to the northeast, keeping the storm east of the U.S.

"Even if Matthew moves northward across Cuba early next week, as we suspect it will, then it could still find a way to get into the eastern Gulf of Mexico," said AccuWeather Senior Meteorologist Bernie Rayno.

What can we expect if the predictions come to fruition? Rain in the northeastern states into this weekend, with the possibility of the tropical system moving toward the U.S. Atlantic Coast and even the southeastern states if it is strong enough to last into next week.

AndNowUKnow will continue to monitor the situation and keep you up to speed on Matthew’s potential effects to the produce industry.