HOUSTON, TX - An 18-wheeler headed north bearing a load of watermelon and other fresh produce careened into hot water last weekend—literally—after the vehicle crashed off a North Loop frontage road, tearing apart its trailer and spilling fruit into the waterway below.

According to a report by the Houston Chronicle, the truck upended with its trailer suspended part-way over a bridge, and its contents—boxes of watermelons, bananas, and more—were spilled into the bayou below. 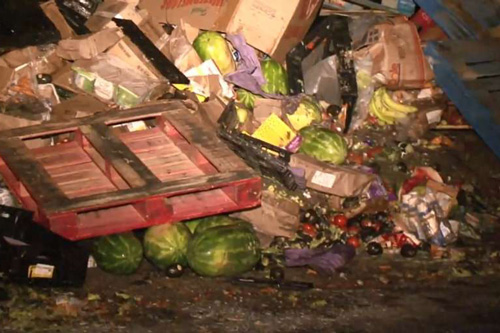 The truck’s driver was reportedly headed northbound when he lost control of the vehicle. The truck subsequently slid down a grassy embankment and toppled onto the frontage road adjacent the highway, clipping a guard rail and flipping over onto the edge of the bridge below.

The trailer was reportedly completely dismantled and the ill-fated fruit destroyed as it dropped into the brackish water below.

The truck’s driver managed to avoid injury, but his melons, unfortunately, suffered a fate worse than Gallagher.